A criminal court in the Egyptian capital Cairo has postponed until June 25 a trial in which Mohamed Morsi, the deposed president, and 10 others are charged with leaking classified documents to Qatar.

Morsi appeared in Sunday’s session for the first time wearing the red uniform reserved for prisoners to be executed.

The same court on Tuesday sentenced him and five others to death on charges including “murder” and “attempted murder” during a prison break from the Wadi Natroun prison in 2011.

Sunday’s trial came as part of the fourth trial against Morsi since his overthrow.

Morsi has already been sentenced to 20 years in prison in another case, death in the Wadi Natroun jailbreak case and to life in jail over alleged leaks to foreign powers including Hamas, the Palestinian faction which rules the Gaza Strip, and Hezbollah, the Lebanese Shia armed group.

Since Morsi’s overthrow, the Egyptian authorities have led a sweeping crackdown on suspected Islamists, which has seen hundreds killed and thousands thrown in jail.

No former Egyptian president has ever worn the red outfit before.

The spiritual leader of Egypt’s outlawed Muslim Brotherhood, Supreme Guide Mohamed Badie, has, however, previously appeared in the bright uniform.

The government has banned the 86-year-old Muslim Brotherhood, designating it a” terrorist organisation”.

In April 2014, Badie was first sentenced to death with 682 others over clashes in Minya following the deadly dispersal of pro-Morsi sit-ins in Cairo in August 2013.

The sentence was then overturned, and a retrial ordered in the case. Then he was sentenced again to death twice.

In another development on Sunday, dozens of women held a vigil outside Egypt’s presidential palace, challenging a law that restricts protests and calling for the release of people detained for violating the controversial measure.

Organisers said they did not seek prior permission from authorities to stage the vigil near the palace of President Abdel Fattah el-Sisi.

Police formed a cordon around the women, who raised photos of detainees.

Some protesters raised banners that read: “Ramadan is not the same without you,” in reference to the Muslim holy month of fasting that brings families together.

The protest law, in place since 2013, criminalises any gathering of more than five people without prior police permission, and imposes hefty fines and prison sentences on violators.

Authorities said the law is necessary to end the chaos that plagued Egypt since its 2011 revolt.

Activists said the law is used to muzzle critics. Thousands of people have been detained over the law, with some sentenced to as many as 15 years for protesting and allegedly using violence.

Yara Sallam, prominent women rights defender, and activist Sanaa Seif, who hails from a well-known family of rights defenders, were arrested exactly a year ago outside the palace for opposing the law and are currently serving two-year sentences along with 21 other activists.

Some in Sunday’s protest posted on their Twitter accounts that journalists were harassed, with one of them saying that his pictures of the protest were deleted by police.

There were no reported arrests. 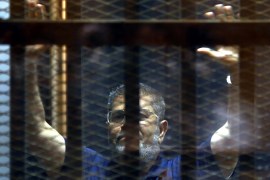 Egypt court sentences Morsi to life in jail for spying

Court yet to rule whether it will confirm or commute a death sentence it handed down against Morsi in a separate case. 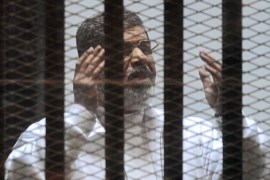