Hundreds of Beijing supporters had converged outside government buildings on Thursday as city legislators voted on the electoral package that aimed to define the Chinese-controlled city’s democratic future.

Most pro-government politicians staged a walkout on Thursday as the bill headed for defeat, with just eight casting their vote in support of the package and 28 voting against it. One legislator did not cast a vote, which happened earlier than expected, with only 37 of the legislature’s 70 legislators present.

The government’s reform proposal would have given all residents the right to vote for the chief executive in 2017 for the first time, but it also adhered to a Chinese government ruling that candidates must be vetted by a loyalist committee.

The plan was derided as “fake democracy” by opposition legislators, who pledged to vote against it and deny the two-thirds majority it needed to pass.

“This is not the end of the democratic movement,” he said. “This is a new beginning.”

Pro-democracy and legislator, Emily Lau, told Al Jazeera that she was “very sad and very angry” that she had to vote down reforms that would have achieved universal suffrage.

“[The reforms] do not give the people genuine choice,” she said, adding that the movement would continue to struggle for reforms.

“There are many Hong Kong people who are with us. Maybe we are looking for miracles, but still, we have to try hard.”

China expressed regret over the defeat of the electoral plans, with Foreign Ministry spokesman Lu Kang saying on Thursday that the result was something that Beijing was “unwilling to see.”

Authorities in Hong Kong had said repeatedly that they could not diverge from Beijing’s August ruling, which prompted weeks of mass rallies that brought parts of Hong Kong to a standstill.

Al Jazeera’s Adrian Brown, reporting from Hong Kong, said he did not expect any rush to continue the push for reforms.

“I think for the next two years, nothing will happen – we will have a political impasse in Hong Kong,” he said.

“The feeling is that China has given Hong Kong all that it can and there is nothing else to give.” 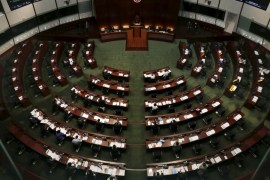 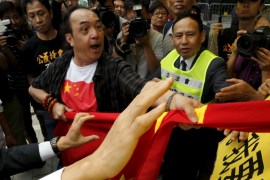 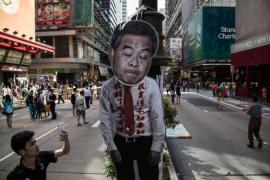 Leung does not identify countries allegedly behind pro-democracy protests, as political crisis shows no sign of abating.