North Korea has said it has been hit by its worst drought in a century, resulting in extensive damage to agriculture during its main planting season.

The official Korean Central News Agency said on Wednesday that the drought has caused about 30 percent of its rice paddies to dry up. Young rice plants normally need to be partially submerged in water during the early summer.

“Recently in our country, there has been a severe drought with sudden extremely high temperatures and nearly no rain,” Ri Yong Nam, a senior North Korean weather official, told the AP news agency on Wednesday. “Now the drought is causing a water shortage and great damage to agriculture, and we foresee this drought will continue for a while.”

He said temperatures in May were 5-7C higher than normal.

Both North and South Koreas have had unusually dry weather this year.

South Korea’s Unification Ministry said precipitation in North Korea was abnormally low in May, and food production could decline significantly if the shortage continues. However, a ministry official said he could not confirm North Korea’s claim that it was experiencing its worst drought in a century.

Jane Howard, a spokeswoman for the World Food Program in Rome, said North Korea has been experiencing water shortages since late last year because of low rain and snowfall. “The lack of water now could seriously affect the main crop season later this year,” she said.

The main crop season is planted in June-July and normally accounts for 90 percent of total food production, she said in an email.

“We are very concerned that if there is poor crop production this year, there will be a significant increase in malnutrition especially among children,” she said.

Farmers at Gangan Cooperative Farm in the province said they have been unable to grow rice seedlings.

“This is the first drought damage in my 20 years of farming experience,” Sin Jong Choi, head of a work team at the farm, told AP. He said the seedlings dried out, so farmers plowed the fields again and planted corn instead.

But even the corn plants “are completely burned to death,” said Bae Tae Il, the farm’s chief engineer. “We are launching all-out efforts to overcome the drought damage.”

In Pyongyang, the capital, the water level of the Taedong River was very low on Wednesday. 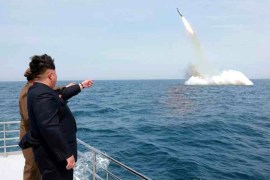