The blast that killed and wounded dozens on Wednesday came as the delegations of rival sides attending peace talks in Switzerland reported no progress on the second day of a UN-sponsored push for a truce.

The Yemeni branch of the Islamic State of Iraq and the Levant (ISIL) claimed responsibility for the attacks.

“The soldiers of the Islamic State in Yemen, in a wave of military operations as revenge for the Muslims against the Houthi apostates [detonated] four car bombs near the centres of Houthi apostasy,” the group said in a statement.

The explosions targeted “the political bureau of Ansarullah [Houthi movement], the Hashush mosque in the Jiraf district, the Kibsi mosque in the Zira district and the Qubat al-Khadra mosque, causing the martyrdom and injury of dozens,” a security official told the Reuters news agency on condition of anonymity.

The attacks occurred as Muslims around the world prepared for the start of the holy month of Ramadan. Ambulances rushed through the streets in northern and central parts of the capital.

Earlier on Wednesday, Houthi fighters in central Yemen blew up the home of a senior politician, Abdel-Aziz Jubari, while he was attending the Geneva talks as a member of the exiled government’s delegation.

Residents of Dhamar city said the Houthis, who had taken over Jubari’s house in April, dynamited the building early in the morning. Yemeni websites published picture of its collapsed ceiling on top of a pile of rubble.

Jubari, who is deputy head of the delegation sent to Geneva by ousted President Abd-Rabbu Mansour Hadi, said he was shocked when he heard the news.

“This is regrettable that people’s manners and behaviours can reach this point,” Jubari told Reuters in Geneva.

“Of course my house is not the only house in Yemen… A lot of people’s homes and properties have been targeted in an unbelievable way.”

Meanwhile, the UN special envoy to Yemen, Ismail Ould Cheikh Ahmed, began shuttle diplomacy in Geneva trying to bridge differences between warring parties, but both sides still refuse to sit at the same table and spell out clashing agendas.

Al Jazeera’s Hashem Ahelbarra, reporting from Geneva, said on Wednesday that both delegations are unhappy with the lack of progress during the talks.

“The delegation representing the Yemeni government met with ambassadors from the EU and said that they are not happy with the way the talks are handled and that there is no progress this afternoon.

“This is a very critical moment – we do understand that the Houthi representatives at the same time said that they are also not happy with the way things are handled.

Ahelbarra also said the Houthis are waiting for an answer from the UN envoy about the make up of their representation to be able to start the talks.

“They have not been able to bring the two parties to move forward or to implement a humanitarian truce.

“They do not seem to have very much different options, they had high hopes that they could convince different factions of a two week human truce to allow international aid to flow into Yemen.

The Houthis said they cannot leave areas they have captured because they think al-Qaeda will take them and they insist to see some guarantee – not by international monitors but by professional Yemeni army.

“We are demanding their retreat from all the provinces to conclude a ceasefire or truce in keeping with Resolution 226 of the Security Council,” he said. 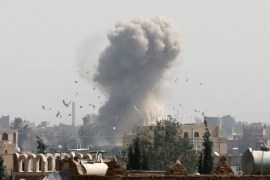 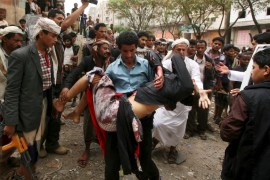