The UN has officially released an internal report looking at sexual abuse and exploitation by UN peacekeepers.

In Haiti, the UN peacekeeping mission engaged in “transactional sex” with at least 229 women who said they needed to do so to obtain things like food and medication, the study by the UN Office of Internal Oversight Services revealed.

One woman raped in Haiti 10 years ago told Al Jazeera she reported the attack to the UN, but never heard anything more.

“Children used to stand around the camp waiting on the soldiers to give them bread and cookies every day, so I stood there too,” she said. “One of them called me over. And I went to him because I thought he was going to give me something to eat. When I got there, he pulled me inside the barbed wire, covered my mouth, and raped me.”

The report said missions in the Democratic Republic of Congo, Liberia, Haiti and South Sudan accounted for the largest numbers of accusations.

It said 480 allegations of sexual exploitation and abuse had been made between 2008 and 2013, of which one-third involved minors.

On Tuesday, a major review of UN peacekeeping operations – the first in a decade – is going to be published.

Al Jazeera has learned that it too will raise the issue of sexual abuse by peacekeepers and will say there needs to be more accountability. 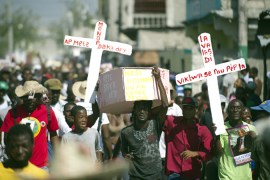 Police fire in the air and use tear on demonstrators as President Martelly agrees to seek Prime Minister’s resignation.