Greek Prime Minister Alexis Tsipras has accused international creditors of trying to “humiliate” the country and called on Europe to reconsider its support for harsh reform proposals of the International Monetary Fund (IMF).

Tsipras’ comments came on Tuesday as Greece faced pressure to tone down the rhetoric and help reach a deal with its creditors that will avert default at the end of the month.

The negotiations concern the release of about $8.1bn in rescue funds remaining in Greece’s massive bailout from the IMF, European Union and European Central Bank.

“The fixation on cuts…is most likely part of a political plan…to humiliate an entire people that has suffered in the past five years through no fault of its own,” Tsipras said.

“The time has come for the IMF’s proposals to be judged in public…by Europe.”

He also said that the global lender bore “criminal responsibility” for austerity measures that plunged the country into a six-year recession.

The embattled 40-year-old premier held a round of consultations with rival political leaders earlier on Tuesday to seek support for a potential compromise deal with just two weeks before the bailout expires.

Also at the end of the month, Greece faces a $1.7bn payment to the IMF, with another $7.5bn due to the ECB in July and August, which Greek officials have said the government cannot afford.

An opposition leader who met with Tsipras said the premier had cited “two or three gestures” that he could make to break the deadlock.

This had raised hope that Athens was about to cede ground to try to avert a devastating default.

It had been hoped that a deal could be reached by Thursday when the eurozone’s 19 finance ministers, who control the purse strings of the rescue programme, meet in Luxembourg.

“The Eurogroup is not the right place to present proposals which haven’t been discussed and negotiated on a lower level before,” Varoufakis told Germany’s mass-circulation daily Bild.

RELATED: Asleep at the euro-wheel

German Chancellor Angela Merkel, asked about the state of negotiations on Tuesday, said there was “unfortunately very little that is new to report”.

She reiterated that she aimed “to do everything in my power to keep Greece in the eurozone” and was looking ahead to Thursday’s meeting of the eurozone finance ministers.

“But there can only be something decided there if there is a joint proposal of the three institutions with Greece. Whether that will succeed by Thursday I cannot say.”

French President Francois Hollande was cautiously optimistic, saying: “We are not far from a solution” while calling on Greece to make “alternative proposals”.

He too said that “everything possible must be done” to keep the country in the eurozone. 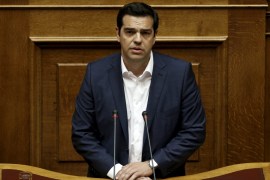