The Philippine largest Muslim rebel group has turned over the first batch of their firearms and fighters in the southern island of Mindanao, as part of the peace agreement the group signed with the government.

The Moro Islamic Liberation Front “symbolically” turned over on Tuesday 75 firearms and 145 rebels to an international body set up to monitor the peace process.

President Benigno Aquino III and rebel leader Al Haj Murad Ebrahim attended the ceremony, which the president said signals the willingness of the rebels to reach a peaceful solution to the long-running violence in southern Philippines.

“Let’s reciprocate the trust that the rebels gave to us,” Aquino said in calling for the passage of a law governing a future autonomous sub-state for Muslim minorities in Mindanao.

“They are extending their hand of peace,” he said referring to the 11,000-strong rebel group.

“Hundreds of thousands of people have already died, and countless communities have been destroyed because of the four decades of violence. How many more people have to die, if we don’t support this peace process?”

The turning over of the rebel arms marks the first time that a rebel group in the Philippines has voluntarily given up their warms as part of the deal.

In his speech, rebel leader Murad said the turning over of their firearms and men “is not a sign of weakness” of the rebels.

“Today, we are being the log walk towards transformation, not surrender.”

Last year, the government and the rebels signed a peace agreement after 17 years of negotiations, paving the path for an autonomous Muslim region.

However, a deadly encounter between an elite police unit and fighters from a splinter Muslim rebel group stalled the passage of a law governing that new region, with opposition leaders calling for an “all-out war” against the rebels.

Aquino, who ordered the police raid on a suspected Malaysian “terrorist” leader last January, was also heavily criticised for the bloody operation.

Despite that incident, the president continued to press for the passage of the autonomy law, which could be seen as one of his biggest legacies, as he finishes his term in 2016.

In an interview with Al Jazeera, political analyst Edmund Tayao said that, while it is still a long way to go before thousands of other rebels return to civilian life, the event on Tuesday represents a “confidence-building” effort between the two warring parties, as they try to implement the peace agreement.

“They have to show that both parties are serious at getting to peace, that despite the setbacks, they are really intent on proceeding with the measures that they have agreed.”

In his speech before the formal turnover of arms, Turkish envoy Haydar Berk, leader of the international group monitoring the agreement, said is a “significant step in the peace process.”

“Although this is regarded as a symbolic one, it will be a role model for the subsequent ones. We are proud to be a part of this historic and courageous peace process. The impact of this is not limited to the Philippines.” 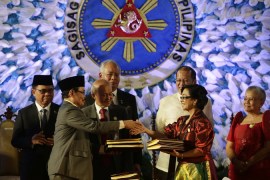 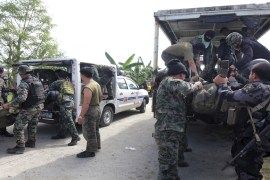