The Colombian army has killed a Marxist rebel commander from the country’s second-largest guerrilla group, the government has said, part of a five-decade military offensive against the National Liberation Army (ELN).

Jose Amin Hernandez, known by his nom de guerre Marquitos, was killed during combat in rural Segovia municipality in the northwestern province of Antioquia.

President Juan Manuel Santos acknowledged the killing on Twitter and wrote, “Congratulations to the armed forces.”

The ELN, founded by radical priests inspired by the Cuban revolution, has been battling the government for 51 years.

Though the group has held exploratory talks with authorities, it has yet to enter formal peace negotiations, unlike fellow rebels the Revolutionary Armed Forces of Colombia, or FARC, who have been hammering out an accord with the government for 30 months. 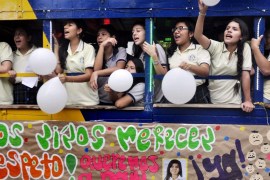