Turkey has taken in hundreds more of Syrians fleeing the conflict along the border in Syria’s Raqqa province after fighters of the Islamic State of Iraq and the Levant (ISIL) group disrupted a previous attempt, Al Jazeera has learned.

Al Jazeera’s Wassim Asasa, reporting from Turkey on Sunday, said the fighters had halted the Turkish process of allowing in the Syrians to determine whether there were any among the crowd who were “wanted” by the group – in order to detain them.

But Turkey managed to devise and implement a “more organised and effective way” of allowing the people in.

Al Jazeera’s Amir al-Abbad, reporting from the Turkish border with Syria, said more than 3,000 Syrians had gathered along the border.

Turkish authorities agreed to open the crossing on Sunday due to increased dangers as Kurdish YPG forces, backed by Syrian opposition groups, launched an offensive to capture the city of Tal Abyad in ISIL’s stronghold, Raqqa.

Seizing Tal Abyad would cut off a major supply route for ISIL from the Turkish border.

The Syrian Observatory for Human Rights reported that fighting was raging on the eastern and southern outskirts of Tal Abyad.

ISIL has destroyed two bridges in Tal Abyad in a bid to prevent its rivals from entering it, the UK-based monitoring group said.

Turkish officials say they have taken in over 13,500 Syrian refugees who escaped fighting over Tel Abyad in the last few days. 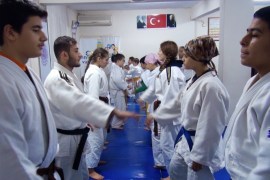 The Turkish Judo club that doubles as a Syrian School

A sports club in Istanbul transforms the lives of young refugees from Syria by converting its venue to classrooms. 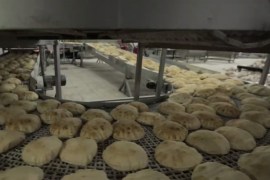 Baking bread on the Syrian border

A Turkish bakery is producing 170,000 loaves of bread per day and sending them to Syria’s needy.