At least 11 Iraqi security personnel have been killed in a quadruple suicide car bombing near Beiji that was claimed by the Islamic State of Iraq and the Levant group.

ISIL, which controls large parts of northern Iraq, said four of its foreign fighters carried out Saturday’s bombings, which targeted Iraqi army and allied units’ positions in the town of Hajjaj, on the road between Tikrit and Beiji.

Seven soldiers were killed as well as four members of the Popular Mobilisation force, an umbrella of mostly Shia units and volunteers that have been heavily involved in the fight against ISIL in Iraq.

At least 27 people were also wounded in the coordinated attack, which saw one of the four car bombs neutralised before it could reach its target, a police colonel said.

Social media accounts sympathetic to ISIL released images purporting to show the suicide bombers preparing for the attacks, and posing with vehicles, which matched the description given by the Iraqi officer.

The pictures identify the bombers as Abu Hafs “the Kuwaiti”, Abu Ibrahim “the German”, Abu Abdul Aziz “the Palestinian” and Abu Yusuf “the Briton”.

The images were posted with the logo of ISIL’s self-declared Salahuddin governorate. 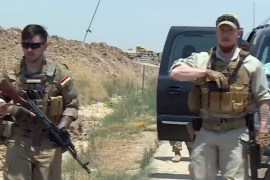 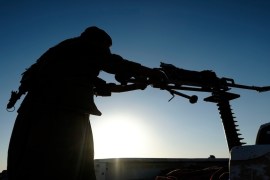