Activists in Indonesia are voicing their opposition to a partial curfew imposed on women earlier this month in Banda Aceh, the capital of Aceh province.

The provincial government says the new rule, which mandates that females working or visiting nightspots must return home by 11pm, is meant to protect women from sexual harassment and prevent them from being overworked.

But opponents of the regulation say the curfew not only takes away the basic freedom of movement but represses women who have to work night shifts to support their families.

Al Jazeera’s Step Vaessen, reporting from Banda Aceh, said only a few women have dared to protest openly against the curfew rule, mainly because it was issued in the name of religion in a province that has a strict interpretation of Islamic law.

Samsidar, a woman activist in Aceh, told Al Jazeera the law is “clearly discriminatory” against women and contradicts the country’s constitution.

Iliza Saaduddin Djamal, mayor of Banda Aceh, defends the new rule, saying: “After 11 pm, places of entertainment are quite dangerous. There are many problems. … If women work later than 11pm, it is not effective. By that time women should be able to rest.”

However, Indonesian government ministers in Jakarta say they want to review the regulations in Aceh to see whether they breach the national constitution.

“Many women are affected by [the curfew law] because they work at night,” Yohana Yembise, minister of women empowerment, told Al Jazeera.

“We need to review this and I will discuss this with our home minister because this is not the only regulation in Aceh violating gender equality.”

In Banda Aceh these days, women are reprimanded for being outdoors after 9pm unaccompanied by their husbands or family members. Unmarried couples are arrested for kissing in the city’s parks.

Violators can be punished by caning in public, like three unmarried couples who were recently caught.

While not all women are obeying the mayor’s regulations, most cafes in the city are now filled with men only.

Many women are hoping that the government in Jakarta will reverse the rule and allow them to work and move around at night as they used to do. 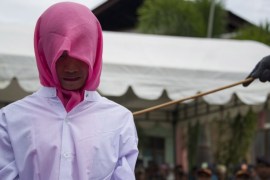 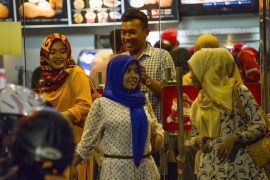