An Egyptian criminal court has sentenced a policeman to 15 years in prison over the killing of a female activist who was taking part in a peaceful protest in Cairo, a judicial source and state newspaper Al-Ahram have said.

The policeman had been charged in March with action that “led to the death of” Shaimaa el-Sabbagh, a lesser charge than murder.

Sabbagh, a 32-year-old mother of a small boy, was shot on January 24 at a march marking the eve of the fourth anniversary of the uprising that ousted veteran ruler Hosni Mubarak in 2011.

Yassin Hatem Salahedeen, a 24-year-old police lieutenant, had been freed on bail after he was charged, but Judge Mustafa Hassan Abdullah in May ordered his detention in the trial’s opening hearing.

Read more: Egypt under Sisi: ‘Criticism is not accepted’

On the day of Sabbagh’s death, some 40 members of a left-leaning party gathered in downtown Cairo with the intention of marching to nearby Tahrir Square, epicentre of the uprising, to lay wreathes in memory of the protesters who fell during the 18-day revolt.

Video clips widely shared on social media showed Sabbagh collapsing in a colleague’s arms with her head, chest and back soaked in blood after a masked policeman fired birdshot in her direction.

Egyptian police consistently maintain they do not use birdshot against protesters despite overwhelming evidence to the contrary.

Rights lawyers and witnesses also said the police hampered efforts to save Sabbagh’s life by preventing an ambulance from passing through the cordon.

In Sabbagh’s case, a senior police officer insisted in a news conference shortly after her death that forensic tests showed she was shot by rounds not used by the police force – implying the involvement of an unknown third party.

The killing struck a nerve with many Egyptians, mostly because of the wide distribution on social media of the images of Sabbagh after she was shot, being lifted off the ground by a colleague with blood running down her face.

Her death also stoked anger over the perceived brutality of the police and called into question the validity of a law adopted in December 2013 banning all street protests without prior permits.

Many of those who participated in the January protest, in addition to at least one witness who testified to prosecutors on the day’s events, are facing separate trials for breaking the law on street demonstrations. 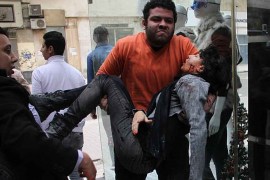 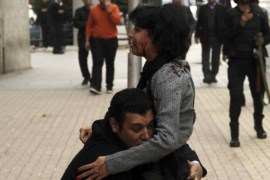