On the fifth day of looking for David Sweat and Richard Matt, state police said on Wednesday that the house searches are not the result of any new leads and law enforcement is retracing its steps in Dannemora, about 32 km from the Canadian border.

“They’ll be doing a 100 percent sweep from the prison right out, see how that goes,” said David Favro, the sheriff for Clinton County, where the prison is located.

Law enforcement officials reiterated their plea for the public’s help in reporting anything unusual in the area.

“We don’t want them out searching the woods,” Favro said. “But if you’re sitting on your porch, get your binoculars out and see if you see something unusual.”

Sweat, 34, and Matt, 48, cut through a steel wall, broke through bricks and crawled through a steam pipe before emerging through a manhole outside the prison grounds.

They were discovered missing early on Saturday after stuffing their beds with clothes to fool guards on their rounds and leaving behind a taunting note: “Have a nice day.”

There was speculation that the inmates had arranged for someone to pick them up outside the prison and were long gone from the area, even in Canada or as far as Mexico.

The escape from the 3,000-inmate state prison has raised suspicions the men had help on the inside.

Investigators have been questioning prison workers and outside contractors to try to find out who may have supplied the power tools.

Contractors have been doing extensive renovations at the 170-year-old prison, a hulking, fortress-like structure that looms over Dannemora’s main street.

A $100,000 reward has been posted for information leading to the men’ capture.

Sweat was convicted in the 2002 killing of a sheriff’s deputy and was doing life without parole. Matt was serving 25 years to life for kidnapping and dismembering his boss in 1997. 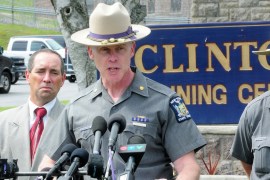 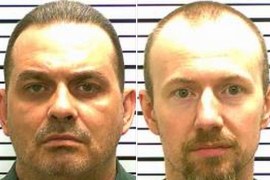 US hunts for killers after ‘Shawshank style’ jail break