A suicide bomber has been killed in an attack targeting the ancient Karnak temple in the southern Egyptian city of Luxor, officials have said, the second attack in just over one week targeting Egypt’s vital tourism industry.

Another attacker was shot dead by authorities during the attack on Wednesday, while a third was arrested, officials said, adding that a police officer was injured.

Officials said no civilians were injured in the attack. Luxor and its ancient sites are frequented by millions of foreign and Egyptian tourists every year.

Images from the scene of the explosion showed what appeared to be body parts on the ground in front of a tourist shop and atop a public restroom, the Reuters news agency reported.

Authorities said police have foiled two other suicide attacks also targeting the Nile-side temple, one of the country’s main tourist attractions, rivalling the pyramids at Giza.

Antiquities Minister Mamdouh al-Damaty said he had, in coordination with the Interior Ministry, ordered security to be bolstered at ancient sites across Egypt.

The Karnak complex is a vast open-air museum, and the second largest ancient religious site in the world, after the Angkor Wat Temple of Cambodia.

It is believed to be the second most visited historical site in Egypt with only the Giza Pyramids receiving more visits.

The attack comes a week after two police officers were shot dead by gunmen on a road leading to the Great Pyramids of Giza, just west of capital Cairo. 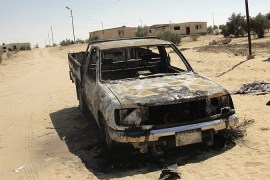 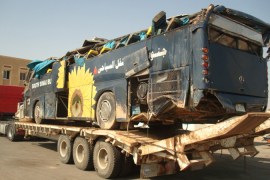 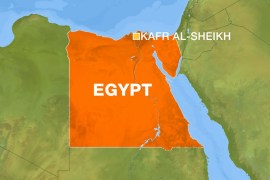 Officials say blast struck near stadium in Nile Valley city of Kafr al-Sheikh where cadets were waiting for their bus.