Cyclone Ashobaa is bringing its first rain to Oman as residents hope the storm will not live up to its name.

This storm is, however, at the lower end of the intensity scale. At its peak on Wednesday, Ashobaa will just become the equivalent of a category one hurricane on the Saffir-Simpson Scale.

Today will see the strongest winds offshore but they could still reach 100km/h on the coast as Ashobaa approaches.

Conditions at sea will turn rough bringing big waves to the coasts of Oman, Iran, Pakistan and India.

Low-lying harbours are often badly affected by storm surges brought in by tropical cyclones. This time the forecast surge, or sea level rise, is less than one metre.

The Oman Meteorological Department is rightly playing down fears that Ashobaa could grow into another Gonu. Gonu was a devastating cyclone in 2007 and the most intense on record in the Arabian Sea.

Dr. Juma Said Al Maskari, the director general of the General Directorate of Meteorology in Oman, said that the expected rain in the worst case scenario is 100mm, compared with more than 900mm in Guno.

The eye of the cyclone looks like crossing the Omani coast somewhere between Masirah Island and the town of Sur on Thursday. Ashobaa will then quickly dissipate leaving thunderstorms behind.

The Pakistan Meteorological Department has warned fishermen in Sindh and Balochistan against venturing into the sea until Friday.

There are two short cyclone seasons in the northern Arabian Sea: one in June as the Southwest Monsoon advances and one in September as it recedes.

This is the first cyclone of this season but the season is short in these waters and this may be the only one. 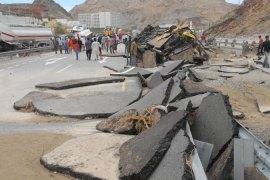 Pakistan and Oman on high alert as the storm named Nilofar tracks northwards.