Drivers in Southern California were told to use tyre chains in the mountains and urban commuters were asked to slow down on Friday as a spring storm brought rain and snow from Santa Barbara to San Diego counties.

The storm moved in during Thursday night, bringing more than 10mm of rain to Whittier and nearly as much to Pomona and Claremont, where the brief, heavy downpours were mixed with hail.

The mountains of San Diego County were veiled in snow as the storm system brought a reminder of winter. Local media reported that the snow lay in a thin layer of only 2.5 cm. This was the first snow since early March and a winter weather advisory was issued to altitudes above 1,500.

The storm offered only temporary relief for Southern Californians longing for rain and does virtually nothing for the enduring drought. The amount of snow that fell is too little to build up any legitimate snowpack and the storm isn’t strong enough to make a large contribution to local reservoirs.

Los Angeles City expects virtually no rain in May, on average 6.6mm, so the 5.1mm on Friday made a dramatic impact, especially with the accompanying lightning. At the University of Southern California, one student said, “[It’s] definitely different, like it never rains. I’m kind of freaking with the lighting and we’ve got to do our finals now.”

A new study by the US Forest Service tried to assess the scope of the problem of the long term drought in terms of tree loss. Researchers estimated that the water shortage has killed off at least 12.5 million trees in California’s national forests.

On Wednesday, California regulators adopted the first statewide rules permitting the building of seawater desalination projects. These are expected to proliferate as drought-stricken communities increasingly turn to the ocean to supplement their drinking supplies.

No more significant rain is likely in Southern California until after the summer, and even then it is far from guaranteed. 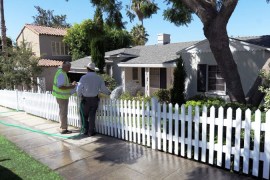