Russia has staged a huge military parade to commemorate the 70th anniversary of victory over Nazi Germany in a conspicuous show of military might.

Leaders from around the world attended the parade on Moscow’s Red Square on Saturday, one of the largest Victory Day festivities in recent decades.

But many Western nations, including the US and Britain, boycotted the event in an apparent protest over Russia’s support for separatists in eastern Ukraine, leaving President Vladimir Putin to mark the day in the company of leaders from other countries, including China, India, Egypt, Cuba, Venezuela, South Africa and Palestine.

Putin also said that “in the past decades we have seen attempts to create a unipolar world,” a phrase used to criticise the United States’ purported aim to dominate world affairs.

Victory Day is Russia’s most important secular holiday, both commemorating the Soviet Union’s huge suffering in the war and highlighting Russia’s portrayal of itself as a world power.

About 16,000 troops were taking take part in the parade on Red Square that showcased cutting edge weapons such as the next-generation Armata T-14 tank.

The Soviet Union lost an estimated 27 million soldiers and civilians in World War II – more than any other country in the conflict – and the Red Army’s triumph remains an enormous source of national pride.

Later in the day up to 200,000 people were expected to march through Red Square with portraits of relatives who fought in the war, in a Kremlin-backed campaign dubbed the “Immortal Regiment”.

In recent years the victory in the 1941-1945 conflict, known in Russia as the Great Patriotic War, has been raised to cult status and critics accuse Putin of seeking to co-opt the country’s history to boost his personal power.

The Victory Parade showcase is being overshadowed by the current crisis over Ukraine, which has seen ties between Russia and the West plunge to their lowest point since the Cold War over Moscow’s seizure of Crimea and allegations Putin is fuelling a brutal separatist conflict. 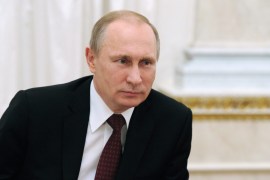 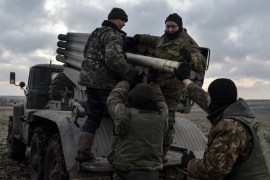