The Philippines is preparing to evacuate thousands of residents along its northeastern coast as a typhoon approaches, officials have said.

Residents near a volcano that has been spewing steam and ash over a central province are also being moved, in case the typhoon causes mudslides.

Typhoon Noul, with winds of 160kph and gusts of up to 195kph, was about 210km northeast of Catanduanes island in the central Philippines on Saturday.

It was expected to make landfall as a category four storm early on Sunday.

Thousands of passengers have already been stranded in seaports along the central and eastern Philippines after authorities shut down ferry services because of rough seas.

The typhoon, the fourth to hit the country this year, is expected to hit a small cluster of coastal towns with heavy rainfall in the country’s northeast island.

It was then expected to weaken as it headed towards the Japanese island of Okinawa by Tuesday.

Officials warned that torrential rain from the typhoon could cause flows of mud and debris around Mount Bulusan, a volcano that has been spewing ash this week.

“There could be lahar (mud and rock) flow, mudslides, that could sweep away houses in the area if there is heavy rain … that is the danger,” Esperanza Cayanan, the division head at the weather bureau, told a briefing at the national disaster agency.

Fernando Cada, a state weather forecaster, told the AFP news agency: “Our advice is for people on the eastern seaboard to avoid outdoor activities,” while adding there was a possibility the typhoon could weaken as it nears land.

Tsunami-like waves caused by the typhoon – which could reach 2.5 metres in height – are forecast in Isabela province and two other areas of the island of Luzon.

Several hundred people living at a farming hamlet below the Bulusan volcano on Luzon island’s southeastern tip were evacuated on Friday due to the potential threat of mudflows from accumulated ash deposits on its slopes.

An average of 20 typhoons cross the Philippines annually. Super typhoon Haiyan was the most destructive in recent years, leaving more than 8,000 people dead or injured in 2013.

“We are praying to God that the typhoon will dissipate. We don’t want to keep going back to evacuation centres,” Rosario Cajipe, who survived typhoon Haiyan, told ANC network in Tacloban City, south of the volcano. 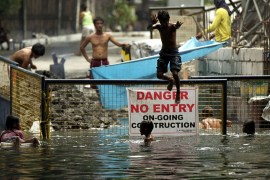 Typhoon Noul bears down on the Philippines

Evacuations are underway in Luzon as severe tropical weather barrels in from the Pacific. 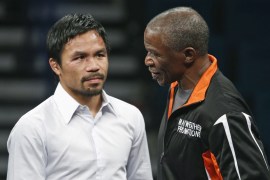