Two Egyptian police recruits have been killed after exchanging fire with smugglers at a border post in the volatile Northern Sinai region, the Interior Ministry has said.

The two policemen were shot dead “after exchanging fire with smugglers at the 10th border post in the village of Matalah in Rafah,” the ministry said in a statement released on Thursday .

Earlier, security sources said that unidentified gunmen in a car shot dead the two policemen who were guarding the gate of a police camp in the city of Rafah.

Last month, Egypt extended by three months a state of emergency imposed on Northern Sinai in October after fighters stepped up attacks in the remote but strategic peninsula bordering Israel, Gaza and the Suez Canal.

The armed group known as Sinai Province, an affiliate of the Islamic State of Iraq and the Levant or ISIL, has spearheaded an offensive against security forces on the peninsula.

The group, which was previously known as Ansar Bayt al-Maqdis, is the most active in the Sinai and aims to topple the government in Cairo. 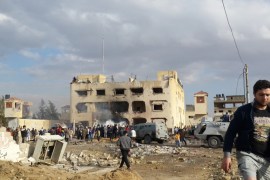