The Palestinians have denounced Israel’s newly-formed government, with chief negotiator Saeb Erekat saying it was clear that it would not be working for peace and would be seeking to expand settlements.

“The face of a new form of racist, discriminatory Israel has been revealed,” Erekat said in a statement sent to Al Jazeera.

He accused Prime Minister Benjamin Netanyahu of “leading the charge to bury the two state solution and impose a perpetual Apartheid regime.”

Erekat’s statement comes as a watchdog group reported that Israel has approved construction of 900 settler homes in annexed East Jerusalem.

Peace Now spokeswoman Hagit Ofran told AFP news agency that the new homes will be built in the East Jerusalem settlement neighbourhood of Ramat Shlomo, following a decision late on Wednesday by the city’s district planning committee, just as Netanyahu was finalising his coalition government.

Reacting to the latest report, Stephane Dujarric, spokesman for United Nations Secretary General Ban Ki-moon, said: “The Secretary General is deeply concerned by recent announcements by Israeli authorities of plans for 900 settlement units in East Jerusalem which are illegal under international law.”

The interior ministry, under whose auspices the district planning committee functions, said however that “no new units were approved”.

“The discussion that took place last night was about a technicality for a plan that had already been approved years ago,” a spokeswoman said.

Netanyahu’s new administration is giving a senior role to the far-right Jewish Home that firmly opposes a Palestinian state.

Robbie Sabel, an expert at Jerusalem’s Hebrew University, said the new government would not be popular with the international community but noted that Netanyahu would be careful to keep foreign policy matters out of Bennett’s hands.

“Intentionally, Netanyahu is keeping the foreign ministry in his own hands for the meantime which means there will be no change in Israel’s foreign policy,” he told AFP.

Following six weeks of intensive negotiations, the Israeli premier finally managed to forge a government late on Wednesday, just an hour before a legal deadline.

Had he failed, he would have forfeited his position as premier.

In an interview with Al Jazeera, senior Palestinian official Hanan Ashrawi said Netanyahu’s government is “anti-peace” and predicted that it would be “short-lived.”

In a separate interview with AFP, Ashrawi also denounced Netanyahu’s coalition partner Jewish Home saying that it “represents the most extreme and racist elements within Israeli society” and warned that the new government could cause “irreparable damage” and “wreak havoc in the region”.

Under the terms of the agreement, Bennett and his party will take several key portfolios including justice and education, as well as control of the World Zionist Organisation’s settlement division, which transfers money to settlements.

The party will have two seats in the security cabinet and the position of deputy defence minister, with responsibility for the Civil Administration that runs all civilian affairs in most of the occupied West Bank. 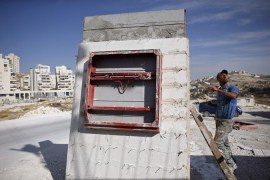 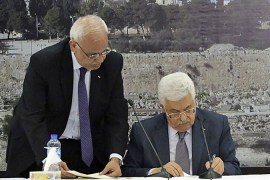