The official start to the Atlantic hurricane season may still be almost a month away, but we have signs of our first tropical development over the Bahamas, heading towards the US.

The offending area of low pressure is currently brewing up around 350km southeast of the Carolinas. The showers and thunderstorms associated with the system have become increasingly organised.

Further development is likely over the next few days as the storms gradually ease their way towards the US coast. The National Weather Service is predicting a 70 per cent probability that it will develop into a tropical depression or even a tropical storm by the weekend.

The sea temperatures are close to 26 Celsius at the moment which is almost 2 degrees above normal. It is also just on the limit at which a tropical storm can form. If the system manages to sit over the core of the warm Gulf Stream current over the next day or two, it will enhance its potential to develop further.

Ocean temperatures do fall to around 25C in the waters off the coast of North Carolina, so the further north it travels the lower the chances of it strengthening. Forecast models suggest that the storm will make landfall over one of the Carolinas at some stage this weekend.

It will continue to stagger towards the shore, slowly and erratically, reaching South Carolina on Saturday or North Carolina on Sunday. Wherever it reaches land, it is likely to bring flooding rains and heavy seas across the southeastern coastline of the US.

Whilst it is not unheard of for systems to develop ahead of the hurricane season, it is rare. Only 24 tropical storms or hurricanes have formed during May since 1851. If this one does so, it will be called Ana. 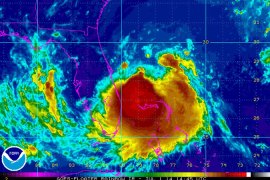 The first storm of the Atlantic Season

Hurricane Arthur strengthens to the east of the US. 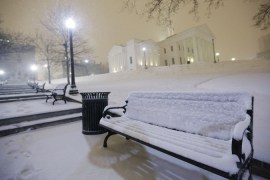 Storm, which has left at least 11 people dead and hundreds of thousands without electricity, seen heading for northeast.