Chilean President Michelle Bachelet has asked all her Cabinet ministers to submit their resignations while she decides who stays and who leaves in the next 72 hours.

Bachelet is faced with the lowest approval ratings of her political career, and recently acknowledged that corruption scandals have rocked her administration.

“Some hours ago I asked all of my ministers to submit their resignation,” Bachelet said on Wednesday in a local Chanel 13 interview with Mario Kreutzberger, better known as Don Francisco, the popular host of “Sabado Gigante”.

“This is the time for a Cabinet change.”

The recent controversy involving her family has taken a big toll on Bachelet’s image, as she won the presidency last year promising to fight against Chile’s inequalities.

“I think the corruption scandals are part of it, but everything points to this as being a reaction to her low popularity ratings,” said Guillermo Holzman, a political science professor at the University of Valparaiso.

“The announcement, the way she does it and the surprise it caused lead us to think that this could part of a profound change.”

A poll released on Wednesday shows Bachelet’s approval rating at 31 percent in April, unchanged from March. That’s the lowest for her current administration and her 2006-2010 presidency.

The survey was carried out by Gfk Adimark, which surveyed 1,049 people between April 7- 29. It has an error margin of 3 percentage points. 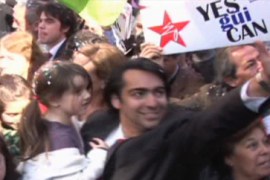