Russian military aircraft were dispatched to head off a US warship that was acting “aggressively” in the Black Sea, Russia’s state news agency RIA reported, but the Pentagon denied any unusual behaviour.

RIA quoted an anonymous source in Russia’s armed forces in Crimea as saying on Sunday that the guided missile destroyer USS Ross was moving along the edge of Russia’s territorial waters and heading in their direction.

“The crew of the ship acted provocatively and aggressively, which concerned the operators of monitoring stations and ships of the Black Sea Fleet,” RIA quoted the source as saying.

“Su-24 attack aircraft demonstrated to the American crew readiness to harshly prevent a violation of the frontier and to defend the interests of the country.”

“The US navy operates routinely in the Black Sea, in accordance with international law,” Lainez said, noting the Ross’ deployment to the Black Sea had been publicly announced.

Russia’s defence ministry was not immediately available to comment on the report.

The incident is the latest example of encounters between Russian and Western militaries, as tensions continue over the crisis in Ukraine and Russia’s annexation of the Crimea peninsula, home to Russia’s Black Sea Fleet, last year.

Earlier this month, both Britain and Sweden said that they had scrambled fighters to intercept Russian bombers near their territory.

The US said last month that it was filing a complaint to Russia over a Russian fighter’s “sloppy” and unsafe interception of a US reconnaissance plane in international airspace over the Baltic Sea. 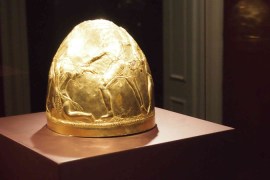 An Amsterdam museum is caught in the middle of a proxy fight between Russia, Ukraine and the West.