Egypt and Saudi Arabia have denied reports of discord among the close allies over the latter’s support of rebels fighting the government of President Bashar al-Assad in Syria.

Saudi Foreign Minister Adel al-Jubeir, who is visiting Cairo for the first time since assuming his post, said on Sunday that he did not know where “impressions” of discord came from.

Riyadh is a key backer of rebels battling to overthrow Assad’s government. Egypt’s government, which is deeply suspicious of religiously inspired movements throughout the region, says Assad will have to be part of a negotiated settlement.

Local media say the dispute over Syria has caused discord between the two allies. Saudi Arabia has given billions of dollars to Egypt since the 2013 overthrow of President Mohammed Morsi, who was a supporter of anti-Assad rebels.

The two countries also said that they shared a “common vision” on the war in Yemen, where a Riyadh-led coalition is waging a bombing campaign against allegedly Iran-backed Houthi fighters.

“We have a common vision on how to deal with the situation in Yemen,” Egyptian Foreign Minister Shoukri said at the joint press conference, according to the AP news agency.

“Our positions are identical, the work is done through close co-ordination at all levels,” he said.

On his part the Saudi foreign minister said that Riyadh and Cairo wanted to build relations with Tehran, but it “depends on Iran’s behaviour”.

“We reject the actions of Iran… and Iran’s support for terrorism,” said al-Jubeir.

Iran “is the only state that interferes in the affairs of the region, whether in Lebanon or Syria or Iraq or Yemen,” he added. 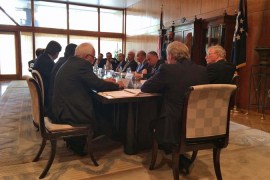 US senators in Saudi Arabia to discuss Syria

Delegation of US senators arrives in Saudi Arabia as part of tour focused on training “moderate Syrian rebels”. 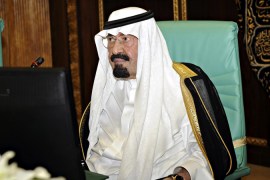 King Abdullah calls on Arabs to stand together against “attempts to destabilise” Egypt. 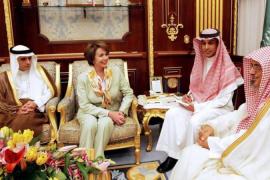