Two explosions have killed at least 13 people and wounded dozens in one of the deadliest attacks in the Iraqi capital this year.

The first was a suicide car bomb that detonated near restaurants and cafes filled with customers. A second bomb also struck in the neighbourhood.

A police colonel told the AFP news agency that at least 13 people died and 39 people were wounded in the car bombing, outside a popular restaurant.

Karrada would have been busy on Saturday night, which marks the end of the weekend in Iraq.

The attacks follow a wave of car bombings on Thursday, which killed 11 people and wounded more than 40.

Another nine people died in two car bombings in Baghdad on Monday.

The Islamic State of Iraq and the Levant (ISIL) group claimed it had carried out those attacks on Shia districts of Baghdad to avenge attacks on displaced persons from a Sunni province.

Karrada is home to both Shia and Sunni Muslims as well as other sects and ethnic groups.

A curfew in operation for years in the Iraqi capital was lifted in February. 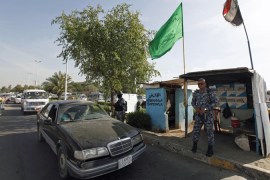 Explosions in Baghdad leave many dead

Three separate attacks have killed at least 17 people, including 11 government security forces in and around Baghdad. 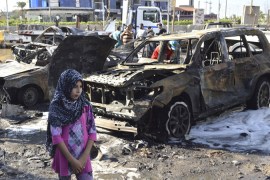 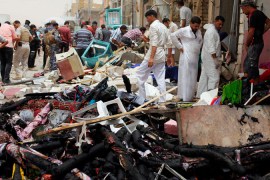 At least 15 people are killed in series of bombs as country goes through its worst spike in violence for years.