The US has removed Cuba from its list of state sponsors of terrorism.

John Kerry, the US secretary of state, has signed an order removing Cuba from the terrorism blacklist as part of the process of strengthening ties between the former Cold War foes.

The move happened 45 days after the Obama administration informed the Congress of its intention to do so. US politicians had that period of time to try to block the move, but did not, as the step was widely supported by all sides of politics.

It comes as officials from the countries continue to hash out details of restoring full diplomatic relations, including opening embassies in Washington and Havana and returning ambassadors to the two countries.

Al Jazeera’s Patty Culhane, reporting from Washington, said the removal of Cuba from the terror list would also help in the process of lifting economic sanctions.

“I think you’re going to see American businesses trying to flood into Cuba now, trying to get in on the ground floor,” she said.

“You’ll see more Americans in Cuba, many more Cubans around the country.”

Friday’s removal of Cuba from the terrorism list had been a key Cuban demand as the countries move towards normalising relations.

Al Jazeera’s Nick Clark, reporting from Havana, said a “cautious optimism continues to build, a mix of hope and expectation, uncertainty and excitement”.

“But it is just an incremental step. In the end normalising relations will mean lifting the trade embargo and travel ban.

“Then you’ll see widespread celebration because then everything changes and opportunity will beckon at every corner.”

Our correspondent said there were already rumours in Havana that an announcement would be made on the reopening of embassies within a week or so.

The presidents of the US and Cuba met at the Summit of the Americas in Panama City in April, in the first meetings between the countries’ leaders in more than 50 years.

The leaders agreed that a strong majority of citizens in both Cuba and the US would back warmer relations. 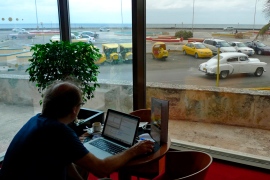 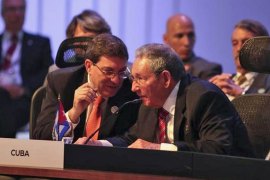 Cuba demands Guantanamo Bay in return for US ties 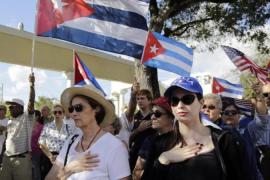 The generational change in US-Cuba relations

Regional circumstances have changed, and so have attitudes among US policymakers and Cuban Americans