Muhammadu Buhari has pledged to launch an intensified military campaign against the Boko Haram armed group after being formally sworn in as Nigeria’s president.

The former military ruler, who was sworn in in the capital city of Abuja on Friday, said that he had inherited “enormous challenges”, including economic turmoil and widespread unrest.

“We are going to tackle them head on … Nigerians will not regret that they have entrusted responsibility to us,” he said.

Buhari, 72, said he would set up a new military command centre in the northeastern city of Maiduguri, the capital of Borno state, which has been a Boko Haram stronghold.

Boko Haram is a mindless, godless group, who are as far away from Islam as one can think

“Boko Haram is a mindless, godless group, who are as far away from Islam as one can think,” Buhari said.

The explosions, two minutes apart, hit the town of Tashan Alade at about 6am.

“Relations and friends of the groom and bridegroom were just gathering when the bomb explosions happened,” said Adamu Illiya, a member of an anti-Boko Haram vigilante group, who added that 12 people were injured.

Dressed in traditional Muslim attire, Buhari stood on the stage holding a copy of the Quran in his right hand as he pledged to uphold Nigeria’s constitution and laws.

Buhari takes over as head of Africa’s most populous nation, top economy and leading oil producer as it limps back to normality after fuel shortages that brought the country to a near standstill.

A sandal-wearing ascetic from Nigeria’s predominantly Muslim north, Buhari has already pledged to get tough on the corruption that pervades every aspect of life the country.

Buhari has vowed to spare no effort to defeat the Boko Haram armed group which has killed thousands and displaced more than a million people in a six-year campaign to establish a caliphate in the northeast region abutting Lake Chad.

About 30 countries have sent high-level representatives for the ceremony, many from the rest of the African continent, which stands to gain if Buhari is able to breathe new life into the economy and restore Abuja’s diplomatic credibility and clout.

South African President Jacob Zuma attended the ceremony in Abuja in a sign ofhis country’s desire to improve relations with Nigeria after a series of diplomatic spats under Goodluck Jonathan.

These included the deaths of 84 South Africans in a Lagos church building collapse in September, and a wave of attacks on foreigners in South Africa this year.

The top diplomats of the US, UK and France were also in attendance.

Roads were closed around the Eagle Square inauguration venue, where dozens of international flags have been hoisted alongside the Nigerian green and white triband and soldiers patrolled.

Al Jazeera’s Yvonne Ndege, reporting from Friday’s ceremony, said that people in the country feel like he will rule differently, and have a lot of confidence that he would be able to take on many of the challenges.

“The hope is that once the ceremony is over, the hard work of governance and putting hope in Nigeria will begin,” she said.

Due to the fuel shortage in the country, the event was powered by generators provided by private companies, she said. 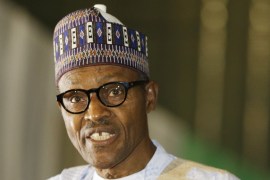 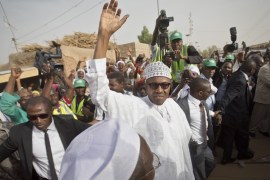 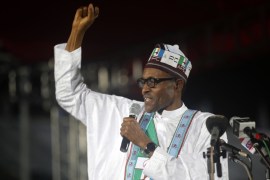