The leader of the Nusra Front, one of Syria’s most powerful anti-government groups, has said that its main mission is to dislodge the government of President Bashar al-Assad.

Abu Mohammed al-Golani, in an exclusive interview aired on Al Jazeera on Wednesday, said that al-Qaeda’s Syria branch had no intention to target the West unless provoked.

“Nusra Front doesn’t have any plans or directives to target the West. We received clear orders not to use Syria as a launching pad to attack the US or Europe in order to not sabotage the true mission against the regime. Maybe al-Qaeda does that but not here in Syria.”

But his statements did include a warning against the US over its attacks on the armed group, which has been blacklisted a “terrorist organisation” by the US.

“Our options are open when it comes to targeting the Americans if they will continue their attacks against us in Syria. Everyone has the right to defend themselves,” Golani said.

He not only accused Western nations of backing the government of President Assad against the rebels, but of also fabricating the “Khorasan” group – which the US says is a covert faction in Syria that aspires to attack the US.

“The West is targeting Nusra because they know we are the real threat to the Assad regime. This is why they came out and said they are only targeting this group that they called Khorasan,” Golani said.

“There is nothing called Khorasan group.The Americans came up with it to deceive the public. They claim that this secret group was set up to target the Americans but this is not right.”

Golani said the Islamic State of Iraq and the Levant (ISIL) group, which has been accused of rampant atrocities and controls large parts of the country, was a main threat to the Nusra Front.

“Assad forces are fighting us on one end, Hezbollah on another and ISIL on a third front. It is all about their mutual interests,” he said.

When questioned whether the Nusra Front planned to establish Islamic state in Syria, Golani said that after the whole war is over, all factions and groups in the country will be consulted before considering “establishing an Islamic state”.

Golani also said that his group will not target the country’s Alawite minority despite their support for Bashar al-Assad’s government.

“The battle does not end in Qardaha, the Alawite village and the birthplace of the Assad clan,” he said. 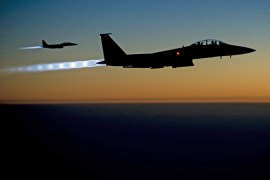