Bombs are, sadly, not unusual in Baghdad. But when a car packed with explosives detonated in the busy Mansour district this week, killing at least 10 people and injuring 27, something very unusual happened.

Karim Wasfi, the renowned conductor of the Iraqi National Symphony Orchestra, turned up as soldiers and police secured the area.

He took out his cello, sat down on a chair, and started to play. Images and video clips of the man some simply call “maestro” quickly went viral, not only on Iraqi social media, but further afield.

Wasfi spoke to Al Jazeera about his decision to play the instrument, about why music and culture are as important as food and water, and about why the Middle East should be living in peace.

Al Jazeera: Why did you go to the site of a car bomb to play your cello?

Karim Wasfi: It’s partially the belief that civility and refinement should be the lifestyle that people should be consuming and, in order to achieve that, I think arts in general, and music in particular, is a great way to convey such a message.

It was an action to try to equalise things, to reach the equilibrium between ugliness, insanity and grotesque, indecent acts of terror – to equalise it, or to overcome it, by acts of beauty, creativity and refinement.

Al Jazeera: So the act of playing the cello was the opposite to the act of detonating a bomb?

Wasfi: Yes. Creating life, basically. I don’t want that to turn into an inevitability of the situation in Iraq: death experienced on a daily basis. No, I want to do the opposite. Life is experienced on a daily basis. Even though we don’t experience normalcy. When things are normal, I will have more responsibilities and obligations. But when things are insane and abnormal like that, I have the obligation of inspiring people, sharing hope, perseverance, dedication, and preserving the momentum of life.

Al Jazeera: How did people react to you when you started to play?

Wasfi: They loved it. Soldiers cried. They kissed, they clapped, they felt alive, they felt human and they felt appreciated and respected, which does not surprise me.

Al Jazeera: What do you remember them saying to you?

Wasfi: “God bless you, we wish our politicians were like you [laughs], you embrace us with your art and beauty.” People were very supportive. They were reacting in a very civilised way. We were lighting candles at night and we had flowers all over the place. And I was playing again. And they shared their dedication to supporting such acts of civility.

Al Jazeera: Do you feel threatened, because some of the armed groups in Iraq are against even the public performance of certain types of music?

Wasfi: The government hasn’t offered me any protection. I’m not threatened. I think I’m threatening the closed-minded, backward individuals if there are any. I’m not intimidated. It’s not only challenging terror. It’s about duty and high standards. If people are troublesome enough not to accept music – different genres of music or classical music, the thing that I do – if this is not accepted, if it’s demonised, and their ears can only recognise the bombastic, loud noise of bombs, then I can imitate the noise of bombs with my cello, or through the orchestra, without killing anyone. They can listen to that.

Al Jazeera: Some people say that, at a time of war, music and culture are an indulgence, that people need to concentrate on more basic necessities.

Wasfi: An absolutely false statement. I think this is rubbish. At this stage, it is needed as much as food, as much as oxygen, as much as water. I do understand the reality behind the argument of basic services and basic needs. I think this is as basic as electricity and water. Maybe I’m being as extreme as the other side is.

Al Jazeera: Why is culture and music as basic a need as food and water?

Al Jazeera: How do you feel about what you did going viral, getting so much attention?

Al Jazeera: Is that how you see this violence? As insanity?

Wasfi: At the moment, yes. Because, especially in this part of the world, people have the resources, the manpower, the assets, the time, the geography, the atmosphere, the weather, the sun, vitamin D, you name it. They have every reason to live in peace. 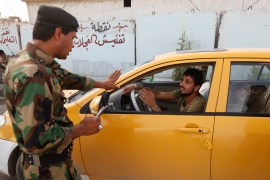 With constant violence, negotiating Iraq’s capital is not easy. Yet every day, the streets are busy. 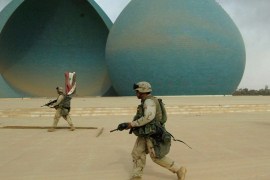 The 1991 and 2003 attacks on Iraq destroyed museums, libraries, theatres and heritage sites.