A fire has swept through a nursing home in central Chinese province of Henan killing at least 38 people, officials have said.

The blaze broke out on Monday evening in an apartment building at a privately owned home for the elderly in Pingdingshan city, the state news agency Xinhua said on Tuesday.

Two out of the six injured were in critical condition in a hospital, the work safety bureau of the Henan province said in a statement on its website.

Al Jazeera’s Adrian Brown, reporting from Beijing, said that about 44 people were rescued from the blaze.

“But this old people’s home had 168 residents, so by the middle of Tuesday morning it was fair to assume that many of them did not make it,” he added.

He also said that the “ferocious” fire likely occurred while the residents were asleep and would have had almost no chance of escape.

Search and rescue operations were continuing, Xinhua said, and the cause of the fire remained unclear. 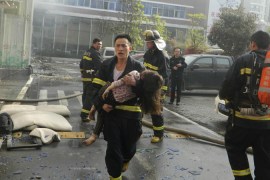 At least 11 killed and 50 others injured after blaze that started in internet cafe spreads to hotel in central China. 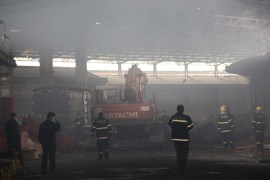 At least 16 people killed, five others injured after fire destroys market in city of Shenzhen in country’s south.