Manila, Philippines – A Filipino mayor has admitted having links to a “death squad” accused of summary executions in the southern Philippines, and has vowed to “kill” more if elected president in May 2016, raising alarm among human rights groups in the country.

Phelim Kine, a senior official of Human Rights Watch in Asia, told Al Jazeera on Monday that it is “grotesque and unacceptable” that Davao City Mayor Rodrigo Duterte is publicly supporting the use of extrajudicial killings as a solution against crime in the Philippines.

In an interview with a local TV station on Sunday, Duterte said that he does “not covet” the presidency.

“But if I become president, you all better hide. I will kill all of you,” he said, addressing suspected “criminals”.

“Me? They are saying that I’m part of a death squad? True, that’s true,” he said in a mix of English and Visayan, a language spoken in southern Philippines.

Duterte was responding to the demands by human rights groups to investigate more than 1,000 extrajudicial killings in his city since the late 1990s, when he was also the city mayor.

In recent months, he has been trying to raise his national profile, travelling across the Philippines, and highlighting “peace and order” in the city of Davao as a model for the whole country, even as he remained evasive about his presidential ambition.

Recent surveys showed him running third in the 2016 presidential election race, prompting rights groups to warn against his human rights record as mayor.

In 2012, the Philippine Commission on Human Rights recommended to government prosecutors to file murder charges against Duterte. But prosecutors refused to indict him and only police officers were charged and convicted of neglect of duty.

“Given that Mayor Duterte is publicly and proudly claiming some responsibility for death squad killings in Davao, and on top of that threatening possible future extrajudicial killings, that should be adequate ground for Philippine authorities to launch a long overdue and much-needed investigation into Mayor Duterte’s alleged death squad links,” Kine said.

Lawyer Marc Titus Cebreros, executive director of the Commission on Human Rights in the Philippines, said that while it is still unclear if Duterte is running for president, his statement is “troublesome”.

“They are not empty boasts. The facts on the ground speak of so many people who are killed without due process, without being arrested and put to trial,” he said.

Max de Mesa, chairman of the Philippine Alliance of Human Rights Advocates, said that Duterte’s rising popularity among voters reflects the frustration of Filipinos of the government’s “failure” to fight corruption and criminality in the country. 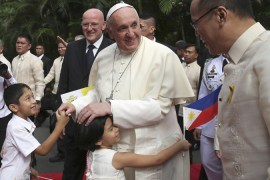 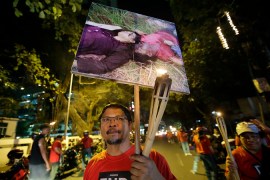 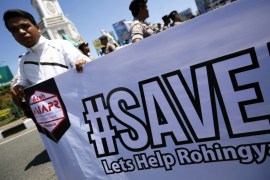