The Islamic State of Iraq and the Levant (ISIL) group has reportedly killed hundreds after seizing the ancient town of Palmyra last week.

Syrian state TV reported that about 400 civilians had been killed by the group since Wednesday, while activists in Palmyra said ISIL fighters hunted down President Bashar al-Assad’s troops and loyalists, killing up to 300 of them.

Nasser, of the Palmyra Media Centre – a monitoring group on the ground – told Al Jazeera that most of those killed were government troops captured by the fighters after taking over the town.

“Shabiha [a term used to describe pro-regime militias and supporters], including men and women, were the ones targeted and killed,” he said.

A Facebook page used by ISIL to publish its statements posted a photo of 20 Syrian soldiers in uniform captured in Palmyra, known as Tadmur in Arabic.

Nasser also said that Palmyra has been besieged by ISIL, which is not allowing civilians to leave or enter it, and that basic services have been cut off in the town.

“Water, electricity and phone landlines have been cut off there,” he added.

Meanwhile, the Syrian military was deploying troops in areas near Palmyra, in an apparent preparation for a counterattack to retake it.

Local activists said government fighter jets carried out more than 10 attacks on the city on Monday morning, resulting in a number of casualties.

Talal Barazi, the governor of the central province of Homs, which includes Palmyra, told the Associated Press news agency on Sunday that the military has been fighting ISIL members in a nearby area called Jizl.

Barazi confirmed that there were plans from the government forces to launch a counterattack against ISIL fighters in Palmyra.

“There are plans, but we don’t know when the zero hour for a military act in Palmyra [will be],” Barazi said without elaborating.

The capture of Palmyra has stoked fears that ISIL might try to destroy one of the Middle East’s most spectacular archaeological sites – a well-preserved, 2,000-year-old Roman-era city on the town’s edge – as they have destroyed others in Syria and Iraq.

Ryan Rifai in Doha contributed to this report 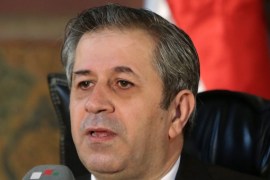 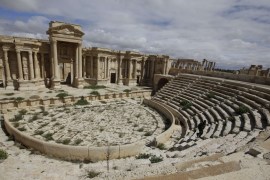