Severe storms have brought record breaking rainfall to the Southern Plains leading to flash flooding. At least three people have been killed and hundreds of homes have been destroyed.

More than 2,000 people were forced out of their houses, many from roof tops, as the storms, which also spawned tornadoes, struck on Sunday morning.

In the Texas, the Blanco Rover rose so quickly that many people woke up to find their homes surrounded by water. The river, which reaches flood stage at 4 metres ultimately crested at 12 metres.

Authorities say that the river peaked around 3 metres above the previous record flood level, and rose 8 metres in just one hour and left pile of wreckage up to 6 metres high. Rescuers had to use pontoon boats and a helicopter to pull people out.

Dallas is now braced for severe flooding from the Trinity River, which is expected to crest near 12 metres on Monday. The Red and Wichita rivers are also well above their flood stages.

This May has already broken rainfall records for several cities across the Southern Plains. Oklahoma City has had 695mm of rain so far this month. The state capital will normally receive 130mm of rain in May, with an average annual total of around 804mm.

The storm system has now moved east, but there are likely to be further showers across the southern states. Severe weather is expected to stretch from the Midwest to Louisiana and Mississippi over the next few days. 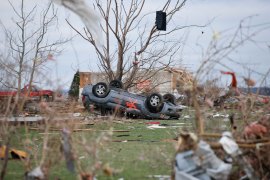 The death toll from twisters is often greatest during the month of April. 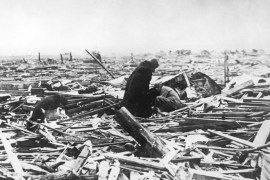 Slow start to US tornado season

The winter cold across the country has been grabbing the headlines, but the twister threat could soon return.