A group of women activists have made a rare crossing of the Demilitarized Zone (DMZ) dividing North and South Korea in a move aimed at promoting peace and reconciliation on the divided peninsula.

Made up of 30 women from 15 countries, the group crossed the demarcation line by bus on Sunday, after South Korean authorities refused to allow them to walk across the DMZ.

Marking International Women’s Day for Peace and Disarmament, the group originally wanted to cross the DMZ through the Panmunjom “truce village”, where North and South Korean soldiers stand just metres apart in a permanent face-off.

Authorities on both sides said they could not guarantee the safety of the women had they walked across.

The group of women, which includes two Nobel Peace laureates, walked, carried banners and sang on the North Korean side of the first checkpoint leading into the DMZ.

The North Koreans then allowed a South Korean bus to cross the demarcation line to pick them up on the north side of the DMZ and transport them over the border to South Korea.

United Nations Command officials met the group inside the DMZ after they crossed the demarcation line, and allowed them to march again after the final checkpoint on the southern side.

“We were able to be citizen diplomats,” Gloria Steinem, an 81-year-old feminism pioneer, told the AP news agency.

“We are feeling very, very positive. We have received an enormous amount of support,” she said after passing through South Korean immigration.

Detractors however argued that the group’s peace mission had played into the North’s hands by refusing to directly criticise Pyongyang for its dismal human rights record.

They also suggested the activists’ interactions with North Korean women in Pyongyang were meaningless given that those women were likely specially selected by the authorities.

“I know we had real human exchanges with North Korean women,” Steinem insisted.

The United Nations Human Rights Council has accused the North of using torture, rape and murder inside the country’s labour camps where political prisoners are held.

Robert Kelly, a professor of political science and diplomacy at South Korea’s Pusan National University, told Al Jazeera that “by crossing between the two states and making it look like both the North and the South are equally to blame, the march is letting Pyongyang off the hook”.

“They are not morally the same, North Korea has a terrible record of human rights abuses. It allowed up to two million of its people to starve to death in the late ’90s. To suggest the two are analogous, as the march is suggesting, is an error,” Kelly said.

The DMZ is one of the world’s most heavily fortified borders in the world, bristling with watchtowers and landmines, and crossings through the land border are extremely rare.

The Koreas have remained divided since the 1950-1953 Korean War ended in an armistice, not a peace treaty. 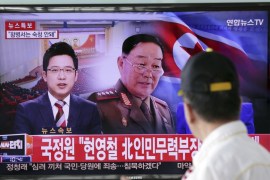 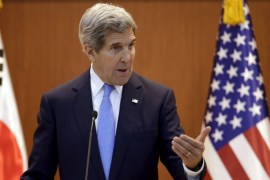 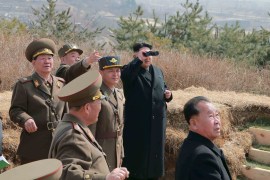 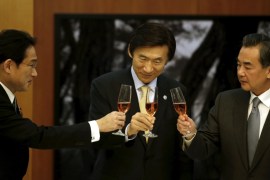