Myanmar has carried out its first rescue of Rohingya refugees stranded at sea, saving about 200 people, the country’s navy said.

Tin Maung Swe, an official in the western state of Rakhine, told the AFP news agency that those on board were “Bengalis”.

“Bengalis” is a term often used disparagingly by Myanmar officials to describe the Muslim Rohingya minority, 1.3 million of whom live in the country but are not recognised as citizens.

The navy rescue was welcomed by the United Nations High Commissioner for Refugees (UNHCR) which said it was helping local authorities provide assistance to the migrants.

But fears remain for many more still left on boats in the Bay of Bengal.

“We hope that this recent positive development will be followed by other disembarkations in Myanmar and across the region, well in advance of the coming monsoon rains,” said UNHCR spokeswoman Vivian Tan.

The imminent monsoon season, when heavy rains and cyclones lash the region, usually signal a significant drop off in regional boat migrant numbers.

But a recent crackdown on the people-smuggling trade in Thailand led to scores of migrants being abandoned on stricken boats just as the weather is set to change.

In the Bay of Bengal, the UNHCR believes up to 2,000 migrants are still stuck on vessels controlled by people smugglers who have been unwilling to begin the journey south because of the crackdown.

A trickle of would-be migrants have recently returned to Myanmar after relatives raised funds to buy them back from smugglers.

The widespread persecution of the impoverished community in Rakhine state is one of the primary causes for the current regional exodus, alongside growing numbers trying to escape poverty in neighbouring Bangladesh.

On Thursday the foreign ministers of Malaysia and Indonesia, whose countries are destination points for Rohingya fleeing persecution, met Myanmar officials as pressures mount to stem the migrant exodus from its shores.

Earlier this week, Malaysia and Indonesia relented on a hardline policy of pushing back the boats, and said their nations would accept the migrants for one year, or until they can be resettled or repatriated with the help of international agencies. 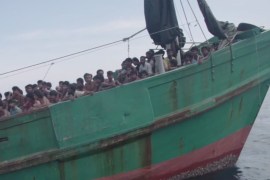 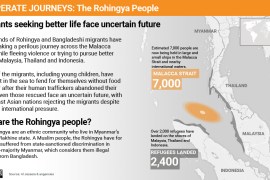 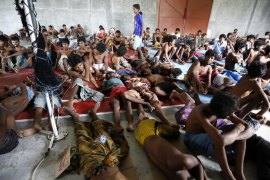