More recorded telephone calls said to be from the Egypt president’s office have been leaked which appear to show cooperation between Egypt and the United Arab Emirates to transfer weaponry to Libya.

The recordings, which were aired by a pro-Muslim Brotherhood channel in Turkey on Thursday, relate to a period while Abdel Fattah el-Sisi was head of the military and just before he became president.

The audio appears to reveal Egyptian officials worked with their counterparts from the UAE to deliver weapons to the Libyan General Khalifa Haftar.

Haftar is the commander of the army for the UN-recognised government in Tobruk.

A UAE general can be heard organising a shipment to be sent from the emirate to port in eastern Egypt, and from there to an undisclosed location in Libya.

In another recording, the general can be heard speaking to a voice said to be that of Abbas Kamel, Sisi’s office manager.

Earlier this month, analysis of several recently leaked audio recordings of controversial conversations between senior Egyptian officials ahowed “no indications” of them being fabricated, according to evidence provided to British police, the New York Times reported.

The New York Times reported that an analysis of the recordings – commissioned by lawyers for Egypt’s Muslim Brotherhood – found there were “no indications that the recordings were fabricated by splicing together disparate statements out of context”.

According to the US newspaper, audio forensics firm JP French Associates found “moderately strong evidence to authenticate Mr Sisi’s voice on two of the recordings and the voice of a top general, Mamdouh Shaheen, on another”.

The analysis will reportedly form part of the lawyers’ evidence in a British criminal case against the leaders who orchestrated the overthrow of Mohamed Morsi in 2013.

After the first recordings emerged last year, Egypt dismissed them as fabricated. 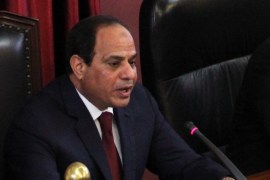