Doha, Qatar – The Islamic State of Iraq and the Levant (ISIL) has captured Syria’s ancient city of Palmyra, giving them control of almost half of the country, according to a monitoring group.

Located in central Homs province and in the heart of Syria, Palmyra lies 210km northeast of Damascus in desert that stretches to the Iraqi frontier to the east.

The UK-based Syrian Observatory for Human Rights said on Thursday that ISIL now controls approximately 95,000 sq km of land in nine out of 14 provinces since they declared their alleged caliphate – which puts them in control of almost half of the country.

The Syrian government previously lost the town of Bosra in Deraa province to ISIL in March, which had also been declared by UNESCO as a World Heritage Site.

In April, ISIL managed to capture and control most of Yarmouk, which is 8km away from the centre of Damascus. Yarmouk is mostly inhabited by Palestinian refugees.

Activists in Palmyra, who requested anonymity, told Al Jazeera that ISIL took full control of the city on Wednesday evening and people were trying to escape, with many left stranded on the streets.

“ISIL have infiltrated the city overnight. Power is down and we barely have any electricity or water. There is fear among residents and we do not know what to expect next,” one activist said.

“The Syrian regime have bombed several targets for ISIL since last night, but air strikes also targeted two mosques in the city – Othman Bin Affan and al-Iman mosques. Several people have been killed and others injured.

“Hospitals and clinics are being bombed too. There are not enough medical supplies or doctors to treat the injured.”

Activists and journalists working at the Palmyra Media Centre made it clear to Al Jazeera that they were incapable of leaving their homes.

Nasser, a journalist in Palmyra, told Al Jazeera that residents in the city could not leave and government forces offered no way out.

“There are almost 170,000 people here, including 50,000 internally displaced people from Homs and Der Ezzor,” he said.

“ISIL is hated by residents here and labelled terrorists. ISIL will not treat us any different than those elsewhere in areas they control. This is a new siege.”

At least 462 people were killed since ISIL’s offensive began on Palmyra on May 13, the Syrian Observatory reported.

ISIL now controls the vast majority of the gas and oil fields in Syria and were able to capture two gas fields around Palmyra since they launched their attack on Palmyra, the Syrian Observatory reported, leaving the only government-held gas fields in the suburbs of Homs and al-Hasakah out of its control.

Apart from being a historical and World Heritage site that dates back to the 1st and 2nd century AD, capturing Palmyra means ISIL have control over areas that stretch to the Syrian-Iraqi border.

ISIL previously looted and destroyed artefacts in Iraq, and have reportedly destroyed historic temples and statues in areas it controls in Syria and Iraq.

Officials say they have also looted and sold artefacts to fund their operations.

Syrian state TV said the army retreated after they secured the evacuation of most residents in Palmyra to save them from ISIL “brutality”, acknowledging that ISIL entered the city in large numbers.

Maamoun Abdulkareem, director-general of Museums and Antiquities in Syria, said on Wednesday that ISIL’s attack on Palmyra is “revenge on Syrian society and civilisation”.

“We hoped the international community wouldn’t fail to defend Palmyra, but we didn’t see any actual reaction from them,” Abdulkareem said.

Hundreds of statues and ancient artefacts from Palmyra’s museum have already been transferred out of the city, he said. 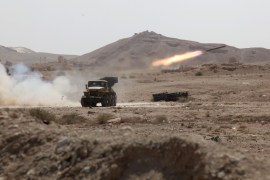 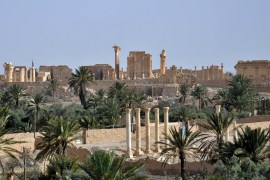 Monitor says fields were vital for generation of electricity for areas under government’s control near ancient city.