When Ethiopia’s ruling party and its allies won 99.6 percent of the parliamentary seats in the country’s last elections five years ago, some wondered if a government often accused of suffocating the opposition would be embarrassed.

The answer was no.

“Imagine a government which has delivered double-digit growth rates for over seven years losing an election anywhere on earth,” Meles Zenawi, by then the leader of Africa’s second most populous nation for almost 20 years, said.

“It is unheard of for such a phenomenon to happen.”

Not only did they not lose. The Ethiopian People’s Revolutionary Democratic Front (EPRDF), a coalition of ethnicity-based parties, won all but two of the seats in the 547-seat parliament, and one of the two they failed to win went to an ally.

Five years later and Meles – a towering figure, not only in Ethiopia but across Africa, is dead – and his more mild-mannered successor Hailemariam Desalegn on Sunday faces his first poll as leader of the all-powerful coalition.

Analysts, however, say he won’t see much of a challenge.

“The EPRDF’s six million plus members, huge resources and support networks provide it a massive advantage and the likelihood of a landslide win,” Mark Schroeder, an African politics analyst with Stratfor, told Al Jazeera.

“This time, for the sake of legitimacy and to please Western donors, a small number of opposition candidates may get a chance to join the parliament. In the overall result the ruling party is expected to win around 90 percent.”

But the scale of that 2010 victory, and the predictions of similar this time, present a legitimacy problem for this darling of foreign aid chiefs and shoulder-to-shoulder ally of the Western security and intelligence establishment.

Opposition figures plead that they are harassed and harangued. Journalists have fled. And six young bloggers have been in prison for more than a year, accused of terrorism on charges that rights groups say have been cooked up.

“We are very confident that we can secure a lot of seats – maybe around 100,” Yonathan Lemessa, spokesman for the high-profile and relatively new opposition party Semayawi – the Blue Party – told Al Jazeera.

“There are some doubts, though, because in some places we can’t even campaign,” Yonathan said, adding that the party has had campaigners arrested, posters torn down and tyres on its cars punctured with nails.

The EPRDF denies it interferes with the opposition and in recent years has accused it of sour grapes. For the government, if its wins it is an endorsement of the development it has spearheaded over almost 25 years.

“We’re confident that we will get a mandate in all of the seats that we’re contesting but, ultimately, the decision lies with the people and we will respect and honour their will,” Desta Abraham, a spokesman for the EPRDF, said.

“We’ve highlighted our successes and also informed of our efforts to solve any problems that arise with Ethiopia’s progress.”

Progress is apparent. Addis Ababa, the thronged and vibrant capital, has seen its skyline transformed by glass towers and mock-European villas. A light rail system is almost finished. Africa’s biggest dam will soon start generating power. A small middle class has emerged, and is growing.

“I would caution that a landslide victory for the EPRDF should not automatically be chalked up to chicanery,” J. Peter Pham, head of Africa analysis at US think tank the Atlantic Council, told Al Jazeera.

“Whatever else one may say about the ruling coalition, there is no denying the stability, economic growth, and development it has delivered.”

Poverty, though, is plain to see and many Ethiopians still leave the country in search of a better life. In April, almost 30 of them were murdered by the armed group, the Islamic State of Iraq and the Levant (ISIL), in Libya en route to join migrant boats on the Mediterranean.

And when crowds took to the Addis Ababa streets to grieve, many directed angry shouts at the government. Police cleared them from the streets.

The Blue Party is seen as the group that most appeals to that disquiet on the part of some urban youth. They have mounted public campaigns and are running for 139 seats, though analysts do not expect them to secure many.

Medrek, a coalition of opposition parties that includes many old warhorse politicians who have been around for several elections, is fielding more candidates but, again, analysts don’t think its chances are strong.

Medrek says that is because it is denied the space to operate.

Diplomats and analysts told Al Jazeera that the election will give the EPRDF – said by some to now be a more collegiate organisation than it was under Meles – the chance to push forward under Hailemariam, who had been seen as a placeholder choice to replace Meles after his sudden death.

“While he is not the larger-than-life figure on the African and global stage that his predecessor was, he has been a steady leader with some significant successes,” Pham said.

Critics say another landslide will lend the EPRDF the legitimacy to shore up its power even further and squeeze any remaining life from the opposition.

Its supporters, though, say its assured victory will allow it to pursue an ambitious policy to quickly turn Ethiopia into a middle-income country.

With the result a foregone conclusion, the mood in the capital is subdued, a few posters and the occasional car trundling past while broadcasting party slogans the only signs that a major election is about to take place.

Ethiopians told Al Jazeera that memories of a disputed 2005 poll, after which 193 street protesters and seven policemen were killed, were still painful and fresh enough to dampen any appetite for a contest.

In a speech to parliament on Thursday, Hailemariam warned that any opposition efforts to kick-off protests this time would not be tolerated.

“Next week it will be over and we will go on as before,” one Addis Ababa resident told Al Jazeera.

“In any case, it has never been elections that bring change in Ethiopia.” 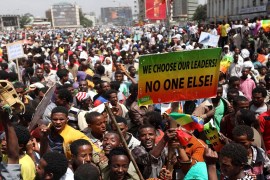 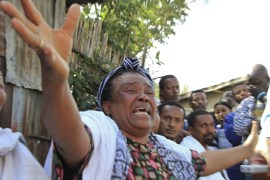 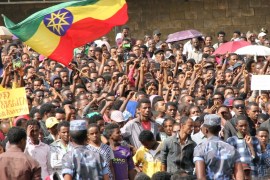