Key infrastructure in war-torn Yemen, including water supplies, health services and telecommunications, are on the verge of breaking down due to a major fuel shortage, a United Nations humanitarian official has warned.

If something is not done in the next few days in terms of bringing fuel and food into the country, Yemen is going to come to a complete standstill.

“The services still available in the country in terms of health, water, food are quickly disappearing because fuel is no longer being brought into the country,” Johannes van der Klaauw told AFP news agency on Saturday.

“Without fuel hospitals can’t work, ambulances can’t go out. You can’t have the water system working because water has to be pumped. The telecommunication network risks shutting down.

“If something is not done in the next few days in terms of bringing fuel and food into the country, Yemen is going to come to a complete stand-still,” he warned.

The official said an arms embargo was also having an impact on the delivery of humanitarian supplies.

“We have the ships which can dock into the ports, we have the aircraft. However the arms embargo has unintended consequences for humanitarian aid,” he said, adding that UN Secretary General Ban Ki-moon has called for a “humanitarian pause”.

“We must find a way to have this happen. At least for a couple of days.”

In the southern port city of Aden, at least 27 people were reportedly killed in the fighting on Saturday.

The fighting has trapped hundreds, if not thousands, of families in their homes for weeks, relying on volunteers making dangerous runs across Aden’s city harbour in rickety boats bearing food and medicine.

As the fighting continues, US Secretary of State John Kerry said it was not inevitable that Yemen would become a failed state, stressing however that Washington was working “very hard” to find a solution.

“I will not say yet that the verdict is in on what Yemen is going to be because we are trying very hard, working with the UN, working with our friends in the region,” he said.

“We are working hard to secure a negotiated process through the UN which will bring the parties together, Yemenites to negotiate the future of Yemen,” he said.

Yemen’s foreign minister, however, said that there will be no dialogue with Houthi rebels, unless they withdraw all of their fighters.

Speaking at a news conference in London, Riyadh Yaseen also said the majority of his country is no longer under the control of the Houthis.

“You can call it an unfortunate war. [Former president] Saleh and the Houthis gave us no choice,” Yaseen said. “Hopefully it will finish soon. It is war to save Yemen, and future of Yemen.” 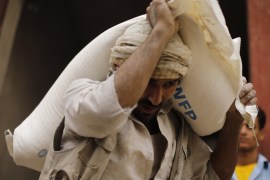 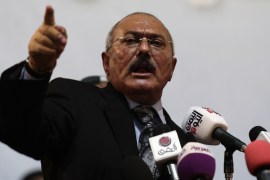