Tens of thousands of Macedonians have turned out to support Nikola Gruevski’s government in a counter-protest after opposition supporters marched through the capital Skopje a day earlier to demand the prime minister’s resignation.

The opposition accuses Gruevski of corruption, tapping the phones of thousands of people and of fomenting ethnic tensions to hang on to power.

Forestier-Walker said: “The numbers appeared as large as the numbers of opposition protesters who had gathered on Sunday, estimated by some to have reached around 20,000 – although the government crowd were confined to a narrow strip in front of the parliament building. They have now left.

“Meanwhile around 1000 opposition supporters are still gathered at the tent village they have erected in front of the prime minister’s office.

“There was a show of strength by the opposition but this is an indication that Gruevski also has broad support.”

Macedonia, a small Balkan country, is deeply divided by a year-long political crisis after disputed elections in April 2014, and still in shock after a bloody clash between police and ethnic Albanian men left 18 dead earlier this month.

The clash was the worst violence since the country narrowly avoided civil war after an ethnic Albanian uprising in 2001.

“The Albanian population makes up 25 percent of the population in Macedonia , but they don’t seem to be represented here.”

Gruevski, who only months ago seemed to have a firm grip on power, has also weathered the resignation last week of two key ministers and the implication of his intelligence chief in the phone-tapping scandal.

Sunday’s march – called by Zoran Zaev’s Social Democratic SDSM – brought many ethnic Albanians and Turks onto the streets as well as protesters from the Macedonian community.

Forestier-Walker said Zaev has been releasing self-styled “political bombs” – carefully choreographed news conferences in which audio recordings of taped phone conversations between Gruevski and his appointees implicated them in serious abuses of power ranging from vote-rigging to multi-million-dollar kickbacks.

The government says that the recordings have been faked, and accuses Zaev of seeking to destabilise Macedonia. 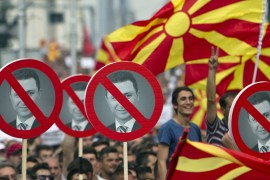 Government of ex-Yugoslav republic under pressure to step down after evidence emerges of phone tapping. 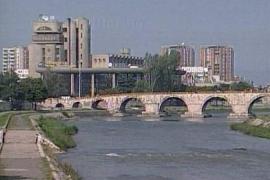