A Lebanese charity operating near the border with Syria has been working to create a self-sustaining community in the refugee camp of Bar Ilyas, in Lebanon’s Bekaa Valley.

Here, those with skills are given the resources to start their own small businesses – an opportunity that is rare for refugees, wherever they end up.

“The aide group offered to give me this shop and provide all the equipment for free,” Dhiya Subhi, a pastry chef, told Al Jazeera.

“I now earn a living for my family and get to employ another worker from the camp as well.”

While Subhi normally specialises in Arabic sweets, requests from fellow Syrians have encouraged him to experiment with pizza as well.

Mahmoud al-Khatib, a Syrian refugee who is a barber, told Al Jazeera that he is now able to feed his family of five on his own.

“Some days I make $3, sometimes $8 or more. Thank God, after this shop, I can afford to buy for my family’s needs. [The] situation in this camp is very, very good. We’ve got almost everything.”

Bar Ilyas holds over 1,500 people and has 450 portable cabins and a working sewage system.

Even with these improved conditions, life in Bar Ilyas is basic, however.

Water can be scarce and power availability can be limited to six hours a day.

The majority of refugees in the camp agree, however, that they will not find themselves in a better situation.

There are over 1.2 million registered Syrian refugees in Lebanon.

Many of them live in tents under harsh conditions as the growing population puts a strain on the country’s infrastructure.

Mohamed Mahmoud Habesh, the head of the charity running Bar Ilyas, told Al Jazeera the group was committed to providing for the Syrians.

“All refugees want to return,” he said.

“No one wants to stay away from their country and homes. If Syria returns to its normal days, we will take this entire camp back there until people settle in their own homes.” 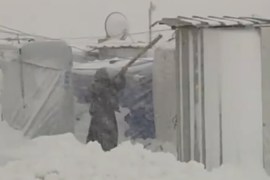 Hundreds of thousands hit hard by record low temperatures across the Middle East. 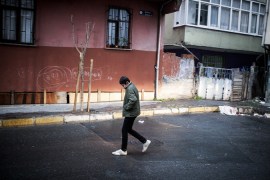 Forced to work long hours to support their families in Turkey, young Syrian refugees feel robbed of their childhood.