Manoah Esipisu said the two leaders, whose nations belong to the East African Community (EAC) common market, had spoken by phone on Sunday. Kenyatta’s counterparts in the region shared his view, he added.

On Monday, heavily armed soldiers were deployed in the capital, Bujumbura, days after the failed coup attempt that followed widespread protests against Nkurunziza’s decision to seek a third term.

In the Musaga neighbourhood, armed soldiers faced off on Monday with hundreds of angry protesters calling on Nkurunziza to rescind his decision, which many say is unconstitutional.

An Associated Press reporter in Musaga saw two soldiers firing live rounds into a crowd of protesters, who repeatedly shouted, “Shoot us.”

Making his first appearance in the capital since last week’s attempted coup, Nkurunziza said on Sunday that he has been battling a threat from Somali armed group al-Shabab.

But the Somalia-based al-Qaeda-linked group denied on Sunday the Burundian leader’s claim of planned attack.

“We think that this is an attempt by him to appease his people, who are standing in the streets protesting against his dictatorship, or to divert the world’s attention from him while he possibly prepares his mass revenge,” al-Shabab spokesman Sheikh Ali Mahamud Rage said in a statement to Reuters news agency.

The landlocked east African nation has been plunged into crisis since Nkurunziza pushed for a third term of office, a move his opponents say breaks the constitution and a 2005 peace agreement that ended an ethnically driven civil war.

More than 105,000 Burundians have fled the country, with 70,000 crossing into Tanzania alone, since the political crisis began. 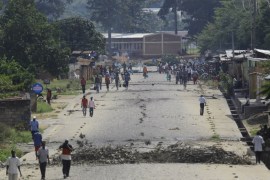