Fighters from the Islamic State of Iraq and the Levant (ISIL) group have overrun one of the last remaining districts held by government forces in the Iraqi city of Ramadi, security officials have said.

Iraqi special forces soldiers were reported to be fleeing the city on Sunday as the armed group succeeded in breaching their last holdout.

The armed group had earlier made significant gains in its battle to control Ramadi, besieging the army base and killing 15 soldiers in multiple suicide car bomb attacks.

Al Jazeera’s Zeina Khodr, reporting from Baghdad, said government officials had requested reinforcements from Shia factions in response to the ISIL advance, a move that could provoke opposition from the government’s Sunni tribal allies.

“There are many influential tribes in Anbar who have warned against this decision for some time now,” Khodr said.

The involvement of Shia militias has been condemned by leading tribal figure, Sheikh Ali al-Hatim, who said it would be considered an “Iranian occupation”.

ISIL fighters had seized most of Ramadi, the capital of Anbar province, on Friday planting their flag on the local government headquarters in the centre of the city, but a contingent of Iraqi special forces was holding out in the Malaab neighbourhood.

Security sources said those forces retreated on Sunday to an area east of the city after suffering high casualties.

“We are now surrounded inside the Operations Command by ISIL, and mortars are raining down,” a military officer inside the base told the Reuters news agency.

“Daesh fighters are in almost every street. It’s a chaotic situation and things are sliding out of control. Ramadi is falling into the hands of Daesh.”

If Ramadi were to fall, it would be the first major city to be seized by the insurgents in Iraq since security forces and paramilitary groups began pushing them back last year, helped by air strikes from a US-led coalition.

Ramadi is the capital of Anbar, Iraq’s largest province, and one of just a few towns and cities to have remained under government control.

Officials say seizure of complex in Anbar’s provincial capital would be group’s biggest victory in Iraq this year. 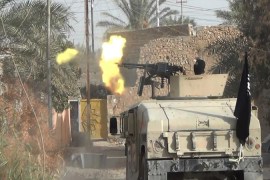 Major offensive under way in capital of Anbar, where only a few small areas of province remain under government control. 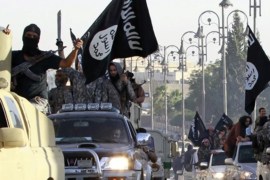 Reinforcements sent to provincial city to try to push out ISIL, which is in control of major government complex.