Kathmandu, Nepal- Three weeks after a powerful earthquake devastated Nepal, buildings in the capital Kathmandu damaged by the shaking and now too perilous to live in have yet to be torn down.

For the past few weeks, people whose homes were destroyed and others who are afraid to return home, have lived in tents on open grounds and even stayed in large spaces like those of wedding venues.

People have renavigated how they walk along familiar streets by avoiding passing under dangerously tilted buildings.

Some have moved away from larger complexes that look on the verge of collapse.

Another powerful temblor, with a magnitude of 7.3, hit shortly after noon on Tuesday, sending people running into the streets.

During the earthquake many tried to jostle for space away from already cracked structures. Patients in the city’s hospitals were moved outdoors into open spaces like car parks and more people spent the night outside after the shaking, which killed at least 117 people and injured nearly 2,000.

“This earthquake has reminded us that there are a lot of dangerous buildings that need to be demolished,” said Bipin Gaire, a civil engineer and the founder of 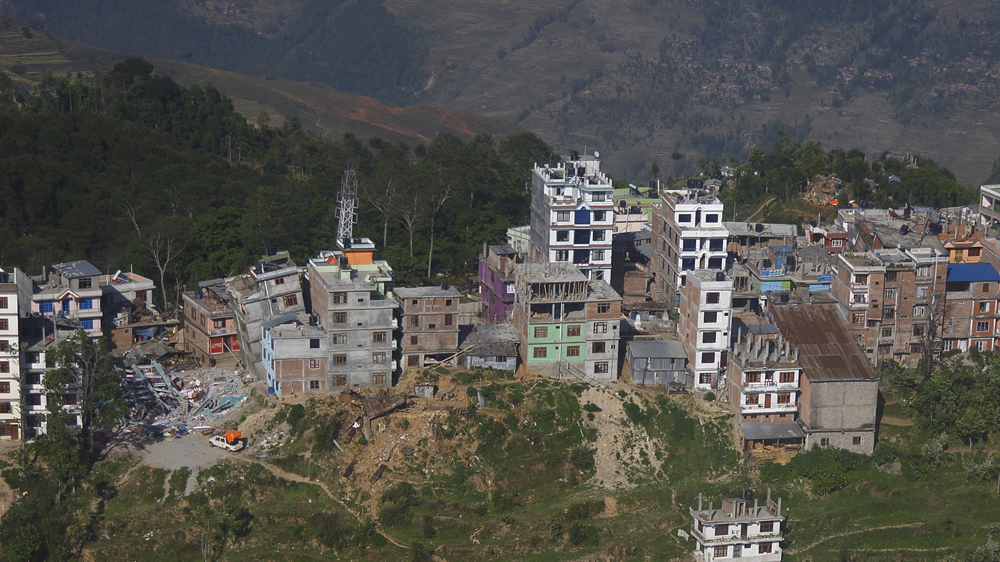 Archana Shrestha, chief engineer at the Kathmandu Metropolitan City Office who approves building permits, said an estimated 30 percent of the buildings in the Kathmandu municipality would need to be razed and valley-wide that figure could be higher.

Many of the structures that will need to be torn down are residential and commercial hybrid spaces where levels were illegally added to the approved number of floors, which in many cases was three or four, according to Shrestha.

Ten percent of government structures will need to be demolished, she said, including portions of her own office, which is located in central Kathmandu near the iconic nine-storey Dharahara Tower, which crumbled on April 25.

Shrestha, who is conducting door-to-door building assessments, estimates that the quake destroyed 60 percent of the city and about 30 percent of buildings in the outer reaches of the valley.

Tuesday’s temblor was a setback. “Even we are fearing to go [back] to the field,” said Shrestha, who was out assessing buildings when the shaking started. “I ran.”

But demolitions haven’t begun, and data-collection of the April 25 devastation hasn’t been completed. Shrestha said fresh data would need to be collated from Tuesday’s shaking.

The 60 odd municipality employees working with hundreds of volunteers from the Nepal Engineers’ Association have assessed about 40 percent of Kathmandu city and about half of the valley’s fringe areas.

Gaire and his team of volunteers have responded to about 1,400 online requests for inspections and more, which have come through over the phone.

About 50 of the 1,400 assessed buildings will need to be demolished or seriously repaired, he said.

The team has found two kinds of homeowners – people who’re staying in homes that are too dangerous for habitation and others who’re too paranoid to stay in buildings that might show superficial plaster cracks but are actually structurally sound.

They’re following the National Society for Earthquake Technology (NSET-Nepal) and the Department of Urban Development and Building Construction guidelines to assess houses both visually and by using tools like hammers.

Most of the buildings fall under two categories, said Gaire. These are either reinforced concrete structures where the beams, pillars and columns support the building weight or the load-bearing wall structures of masonry homes.

“We use hammers to check whether the concrete has failed or not,” Gaire said of the concrete units. A cracked structure gives off a dull thud whereas one that is intact emits a metallic-sounding ring and vibrations.

Across Kathmandu, some buildings are dangerously tilted while many are visibly cracked. Park View Horizon, a high-rise apartment complex in Kathmandu, which was damaged by the earthquake, now stands empty and has been deemed unsafe, but those living around it are fearful that it could collapse on them.

Ramesh Kumwor, a teacher and artist, who lives with his family near the apartment complex, speaking with Al Jazeera’s Faiz Jamil before the last temblor, said that this ominous building is more terrifying than the earthquake.

“People are not scared with earthquake, people are scared with this,” said Kumwor, who is considering leaving the home he grew up in for a safer part of the city. “We’re not sleeping properly. We’re scared about this building only.”