Israeli hardliners and police have clashed with Palestinians in occupied East Jerusalem as crowds of ultra-nationalists marched across the city to mark the 48 years since its occupation by Israel.

At least four Palestinians were arrested during the flare-up on Sunday, as Israeli police used batons and horseback units to disperse counter-demonstrators.

Onlookers said at least two Palestinians were wounded in various clashes, and video footage showed a man being taken away on a stretcher by Red Crescent ambulance staff, the AFP news agency reported.

A Palestinian cameraman working for France’s TF1 television was beaten with flagpoles by the Jewish marchers, his producer Michael Illouz said.

He said that Jamil Kadamani was hit on the head, back and hands and taken to hospital for examination.

Israeli officials said two officers were wounded by Palestinian stone-throwers during the violence near the Old City’s Damascus Gate.

Police would not say how many hardliners descended on the Old City’s Muslim Quarter.

Known as Jerusalem Day, the anniversary marks the occupation in the 1967 Six-Day War of Arab East Jerusalem. Israel later unilaterally annexed the territory in a move rejected by the international community.

The Palestinians want the eastern sector of the city as the capital of their state, and vigorously oppose any attempt to extend Israeli control.

But Israeli leaders have repeatedly vowed that the city will never again be split, calling it their “eternal, indivisible” capital.

“Jerusalem has always been the capital of the Jewish people alone and not of any other people,” Israeli Prime Minister Benjamin Netanyahu said at an official Jerusalem Day ceremony.

Two non-governmental organisations had appealed to the Israeli High Court to change the route so the march would not pass through the Muslim Quarter, but the move was rejected by the court.

In their ruling, the judicial officials stressed there should be “zero tolerance” of anyone involved in violence, and that police should arrest anyone chanting “death to Arabs”.

Leftist groups, including members of the Meretz party’s youth wing, held a counter-demonstration outside city hall to protest against what it called the “march of hate”.

One participating group, the anti-racism movement Tag Meir, said the annual march had become “a focus for extremist groups” and was routinely accompanied by “racist slurs and insults, destruction of property and physical violence against the Palestinian residents of Jerusalem”.

Today, some 200,000 Israelis live in 15 settlement neighbourhoods in East Jerusalem surrounding a Palestinian population of 310,000. 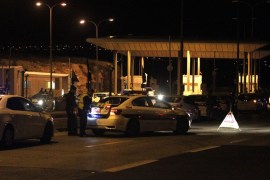 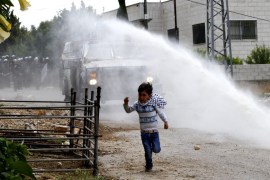 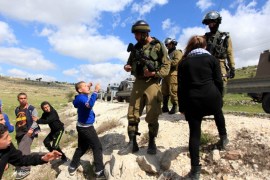