At least 50,000 refugees are living on the shore of Lake Tangyanika in rough conditions after fleeing the political crisis in Burundi, the Tanzanian government has said.

Isaac Nantanga, spokesperson for the Ministry of Home Affairs, told Al Jazeera the Tanzanian government was doing its best to receive the asylum seekers from Burundi but said it was overwhelmed by the numbers.

“There are too many people at this point, and when it comes to the threat of disease, it is difficult to avoid,” Nantanga said.

More than 105,000 Burundians have fled the country, with 70,000 crossing into Tanzania alone, since the political crisis began in neighbouring Burundi. Around 26,300 Burundians have entered Rwanda, most of whom are now living in the Mahama refugee camp.

Burundi’s capital Bujumbura has been hit by a wave of political dissent over the past three weeks, after President Pierre Nkurunziza said he would seek a third term in office.

According to activists, at least 20 people have been killed in clashes with police. The government has repeatedly disputed allegations of heavy-handed tactics. But the ongoing crisis has prompted an exodus across the border.

Nantanga’s comments come as the UNHCR released a statement on Friday warning that the “number of arrivals have risen sharply over the last few days”.

“There are also reports of at least 10,000 people waiting to cross the border into Tanzania,” the UNHCR said.

At least 50,000 were living on the island of Kagunga, on the shore of Lake Tanganyika.

Celine Schmitt, a senior external relations officer for the UNHCR, who is based in Kinshasa, said refugees were entering areas that were difficult to access.

Schmitt told Al Jazeera that there was just one ferry available to carry 600 people at a time from the island of Kagunga to the district of Kigoma where the Nyarugusu camp had been set up. The transfer process takes up to 10 hours.

The journey is fraught with difficulties as the ferry is unable to dock at Kagunga, forcing officials to use smaller fishing boats to carry the refugees to the ferry.

“We have now identified a second ship that can carry up to 300 people, but that will not be able to operate at night,” Schmitt said.

The Tanzanian government said “tents and other necessary facilities” have been provided in Kagunga, but it was battling to keep up with the numbers coming in.

“We have processed around 19,633 people but there are more coming,” Nantanga said.

But UNICEF said they were particularly concerned about the water-borne diseases due to the poor sanitary conditions at the make-shift camp.

Sandra Bisin, chief of communication, advocacy and partnerships in Dar es Salaam, told Al Jazeera that many of the children were arriving at the borders in poor health and some were unaccompanied after being separated from their families.

“They are in dire need of basic shelter, food, health and protection services,” Bisin said.

The UNHCR said that refugees continued to arrive in Rwanda, though the rate of arrival had dropped over the last two weeks. Most of the refugees fleeing to the neighbouring countries are women and girls, the UN said.

“More than 60 percent in the camp in Rwanda, and 57 percent of the camp in the DRC is made up of women and girls,” Schmitt said.

There were unconfirmed reports that authorities in Burundi were discouraging people to leave the country, with a series of roadblocks being set up close to the border region.

The crisis that erupted on April 26 has remained a political one, between political actors and parties, but there are some concerns the crisis may reignite ethnic hostilities between Hutus and Tutsis that characterised the 13-year civil war that ended in 2005.

In a briefing released by the Institute for Security Studies (ISS) on Friday, the think-tank said though the violence hasn’t been widespread across Burundi, “this has not prevented an impending humanitarian crisis for the country or its neighbours”.

“As the protests expanded outside of Bujumbura, more people fled and the situation increasingly threatened regional security,” the ISS said. 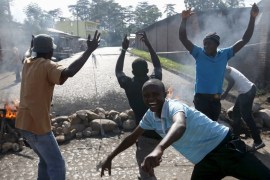