Kosovo police have raided several households across the country, including the families of ethnic Albanians allegedly involved in last week’s deadly clashes with police in neighboring Macedonia.

Last weekend 14 gunmen and eight police were killed and 37 others wounded in clashes in the northern Macedonian town of Kumanovo. Another 26 people, most from Kosovo, have been arrested for the clashes.

Details about the fighting remain murky. Authorities claim the armed group stashed away weapons to launch attacks in a bid to unify Albanians living in Kosovo, Macedonia and Serbia into one country.

But some suggest that authorities in the Macedonian capital Skopje sparked the clash, seeking to shift attention from corruption scandals that threaten to oust the ruling conservatives.

Some of the gunmen are allegedly former rebels who fought against Serbia in 1999 and Macedonia in 2001.

The weekend shootout has upset fragile relations in the Balkans and caught the eye of major powers in Europe.

The European Union and NATO issued statements calling for the return of calm in Macedonia following the deadly clashes.

Russia’s foreign minister Sergey Lavrov branded the clashes acts of terrorism and criticised the European Union’s handling of the crisis.

“The EU must not take a cowardly position and pretend not to see, while trying to present this situation as an isolated episode,” Lavrov said in Belgrade after talks with Serbian Foreign Minister Ivica Dacic.

Lavrov even suggested that “events in Macedonia have been developing in the context” of the Macedonian government’s pro-Russian policies, including its refusal to join the EU sanctions.

Western countries have questioned Prime Minister Nikola Gruevski’s right to govern the country, following a series leaked wiretaps that the opposition claims prove high level corruption and murder cover-ups. An anti-government rally has been called by the opposition on May 17. 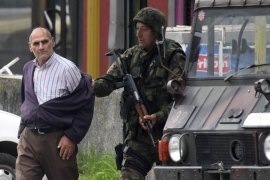 NATO and EU call for calm in Macedonia

Two days of mourning declared after clashes between police and attackers in northern town of Kumanovo kill at least 22.