Indonesia is facing calls to stop virginity tests for women seeking to join the military, with a leading rights group calling the practice “cruel, inhuman and degrading”.

Human Rights Watch (HRW) said interviews with female members of the military showed that the examination, normally conducted through a “two-finger test” to ensure the hymen is intact, was required of women joining the armed forces or planning to marry military officers.

The armed forces defended checking female applicants’ virginity, saying that people of low morals could “damage the military”, but denied that those planning to marry officers were also subject to the checks.

In a statement, HRW said the military “should immediately end the use of so-called virginity tests, which violate the prohibition of cruel, inhuman, and degrading treatment under international human rights law”.

The group described the practice as gender-based violence and said it was “scientifically baseless” as a method of proving that a woman was a virgin.

HRW interviewed 11 recruits and officers’ fiancees who had undergone the tests at military hospitals in several cities on the main island of Java.

They also spoke to people involved in conducting the examinations.

Those tested described the practice as painful, embarrassing and traumatic.

“I felt humiliated. It was very tense,” said one applicant tested in 2013, cited anonymously in HRW’s report.

She added that she was “shocked” that the doctor performing the test was a man.

“It’s against the rights of every woman,” she said.

The test has been standard for decades and one retired air force officer, also cited anonymously, recalled having it done in 1984.

She said four years later she got married but could not make love to her husband for months “because of the trauma that I had with that ‘virginity test’.”

If a person has low morals, “then she cannot join the military. Because if she joins the military it will damage the military, which must handle a huge duty.

“They are responsible for the country’s sovereignty, the unity of the territory, the safety of the nation.”

The HRW report was timed to coincide with a meeting next week on the Indonesian island of Bali organised by the International Committee of Military Medicine, a body that fosters cooperation between medical services of armed forces worldwide. 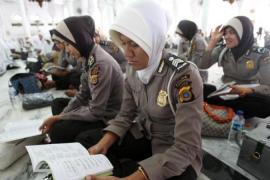