Manila – At least 72 workers have been killed and many others remain unaccounted” for, after a fire hit a footwear factory in a suburb of the Philippine capital.

Jose Soriano Junior, regional director of the Bureau of Fire Protection (BFP), said that as many as 63 people were “unaccounted”, with the death toll expected to rise from Wednesday’s blaze.

“There could be more buried under debris,” he told Reuters news agency.

“There was someone who was welding at the main entrance and suddenly there was an explosion. It was really fast.”

He said there were inflammable materials and chemicals that helped spread the flames.

Police said on Thursday that dozens of bodies had been recovered and transported in body bags to the morgue.

About 200 to 300 people worked in the factory, according to Veato Ang, the factory owner.

“It just broke out and people started running,” he said.

A security guard at the factory told Al Jazeera that the building had “no fire exit”.

According to the wife of the factory manager, who remains missing, there was ongoing welding work in an area of the factory where some chemicals were being stored.

Cause of the fire

Ariel Barayuga, the BFP head, said investigators were trying to determine the cause of the fire that trapped workers at the two-storey factory building of Kentex Manufacturing Inc, which makes flip-flops and slippers.

It took about 15 minutes for the firefighters to arrive at the scene.

The same witnesses also said that they heard loud explosion just before the huge fire engulfed the two-storey storage-like building.

The fire also caused the concrete floor of the second floor to collapse, trapping some of the victims.

Witnesses and firefighters said most of the victims were women workers, many of them from the same area, where the fire hit.

Survivors told local media that many of the workers were unable to escape because of the heavy smoke blocking the entrance of the factory.

“We will finish the investigation and thoroughly review all the evidence. This is a tragic incident and we condole with the families of the victioms,” he said.

Ulysses Aguilar, a top aide of the mayor of Valenzuela district of Metro Manila, where the fire happened, told Al Jazeera a mass burial of the burnt out cadavers could start as early as Thursday night.

It was unclear if the factory had an emergency fire exit.

Fires in the Philippines are frequently blamed on the lenient implementation of safety rules in the country. 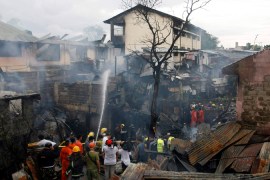 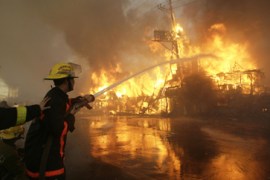 Thousands homeless after blaze tears through shantytown outside Manila.