Heavy gunfire and explosions have rocked Burundi’s capital Bujumbura a day after a senior army officer said he had dismissed the country’s president following weeks of protests over a controversial third term, our correspondent has said.

“We understand military factions loyal to the president are fighting those loyal to the coup leader,” Al Jazeera’s Malcolm Webb, reporting from Bujumbura, said.

The clashes come amid a flurry of rumours over the status of the attempted coup on Wednesday, the whereabouts of President Pierre Nkurunziza, and who remains in control of the central African nation.

A top Burundian general and former intelligence chief Godefroid Niyombare said on Wednesday he had launched the coup, capping weeks of violent protests against Nkurunziza’s controversial bid for a third term.

The general has ordered the closure of Bujumbura airport and the landlocked nation’s borders, and declared he had the support of “many” high-ranking army and police officials.

But on Thursday morning, Burundi’s armed forces chief announced that the attempted coup against Nkurunziza had failed, reported the AFP news agency.

General Prime Niyongabo said the coup had been stopped and that pro-Nkurunziza forces controlled the presidential office and palace.

“The national defence force calls on the mutineers to give themselves up,” he added on state radio, also under the control of forces loyal to the president.

A spokesman for the anti-Nkurunziza camp, Burundi’s police commissioner Venon Ndabaneze, told AFP the claim was false and that his side was in control of facilities, including Bujumbura’s international airport.

“This message does not surprise us because the general has long been allied to the forces of evil and lies,” he said.

Padraic MacOireachtaigh, a freelance journalist based in Bujumbura, told Al Jazeera it was difficult to identify who the army was fighting against, though it “seems to be another army-backed faction loyal to the president”.

Hundreds of people took to the streets in celebration after the coup announcement, shouting “Victory!” and sounding car horns.

Cheering crowds were also seen walking alongside marching soldiers and climbing aboard tanks in the lakeside capital.

The latest radio announcement and the denial signals that the outcome of the coup attempt remains uncertain, and that overnight negotiations within the armed forces – which appears sharply divided over the issue – may have failed.

Hundreds of thousands of people were killed in the conflict, marked by massacres between the majority Hutu – to which Nkurunziza belongs – and minority Tutsi.

Speaking late on Wednesday to France24, General Niyombare said there was still “some confusion” and that “things will become clear” on Thursday.

Nkurunziza, who was endorsed by his ruling CNDD-FDD as candidate for the June 26 polls, became Burundi’s president in 2005 after being installed by parliament. His supporters say he is eligible for a third term as he was not directly elected by people.

Burundi’s constitution allows only two five-year terms, and critics say the move by the president to run for a third term goes against the 2006 peace accord which ended the civil war. 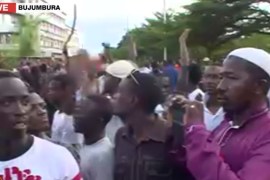 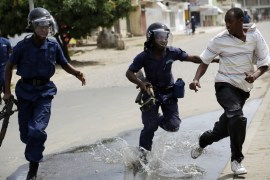 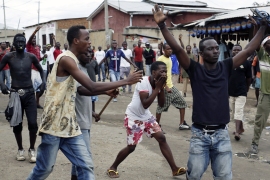